Nasim Pedrad is an Iranian-American actress as well as a comedian. 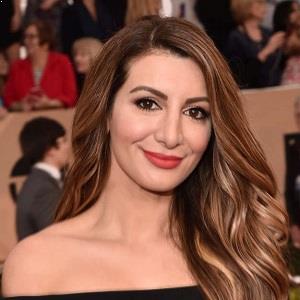 I knew at a young age that I wanted to do comedy, and maybe part of that was trying to fit in at school because I had a weird name, and my parents had these accents, and I was definitely a late bloomer

I really looked up to Tina Fey as a writer, and because I did have a background in writing, she is someone whose career I really did admire

I can easily connect with the prepubescent dork I spent much of my life being.

What is the relationship of Nasim Pedrad?

Despite her popularity, Nasim Pedrad has kept her personal life very low profile.

She has kept her lips sealed when it comes to revealing anything about her personal life. There isn’t any information about her past and present relationships, so she is possibly single.

She believes in marrying from her own origin, Iran which helps their bond even stronger. Some sources claim that she is actually getting married to a rich businessman from her origin. There isn’t any record of her being into any kind of relationship affairs.

With her perfect body and gorgeous beauty, she is a heartthrob for many people.

Who is Nasim Pedrad?

Iran-born Nasim Pedrad is an Iranian-American actress as well as a comedian.

She is best known for her role in the first season of the Fox horror-comedy series ‘Scream Queens’.

Nasim is also known for her impressions of celebrities like Kim Kardashian and Christina Aguilera.

Gorgeous and beautiful Nasim Pedrad was born in Tehran, Iran on November 18, 1981, and raised in Irvine, California.

Her parents, Arasteh Amani and Parviz Pedrad moved to the United States in 1984. She is of Iranian ethnicity and has an American nationality.

She has one sister who happens to be a comedy writer and both sisters are fluent in Persian.

For her schooling, she went to the University High School and graduated from the UCLA School of Theatre in 2003. While studying at UCLA, she also had a chance to be a member of the UCLA Spring Sing Company.

Before joining Saturday Night Live (SNL), Pedrad used to perform with the Sunday Company at The Groundlings and began appearing in numerous movies and television sitcoms.

But she only came into fame when she joined as a cast member on SNL. She joined SNL in 2009 becoming the show’s first female Middle-Eastern cast member.

But after working several years for SNL she left in 2014, to work on the show ‘Mulaney’ which was canceled in March.

While being on SNL, she was also actively engaged in other works and equally at ease in both media.

She has made her appearance in many movies and television sitcoms like ‘No String Attached’, ‘Despicable Me 2’, ‘Allen Gregory’, ‘The Awesomes’ and much more.

After onwards, Pedrad started to appear in a recurring guest role on the Fox sitcom ‘New Girl portraying the character of LAPD officer Aly Nelson.

She even starred as Gigi Caldwell in the first season of Fox horror-comedy Scream Queens. In 2016, she alongside other cast members from SNL appeared in a commercial for Old Navy.

She has received the ‘LA Weekly Best Comedic Performance of the Year Award’ as the Lead in the comedic spoof ‘After School Special’.

Her success in whatever she does has successfully paid well financially as well as made her achieve an estimated net worth of $ 3 million.

Being a pretty private person Nasim Pedrad has neither been rumored nor suffered a controversy.

Nasim had revealed that Kim Kardashian was not too pleased about her SNL impressions.

Her figures stats are 32-25-34 inches. Her hair color is light brown and her eyes are brown.