Natalie Guercio is currently dating reality star, London Rene. They started to date each other from 2008 and are still together.

Previously, she was in a relationship with Nunzio Gianni. This couple together has a son Nunzio. 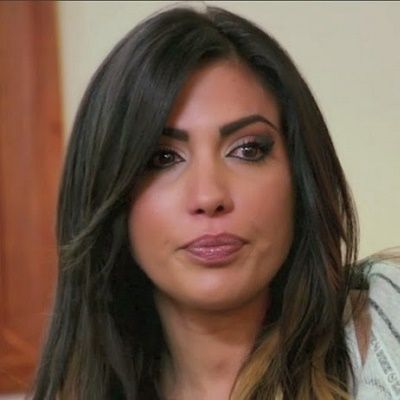 Who is Natalie Guercio?

Natalie Guercio is an American television personality, actress, and entrepreneur. She is best known for Turkey’s Done, Mob Wives, and Wasted Talent.

This actress was born on December 22, 1982, in Philadelphia, Pennsylvania, in the United States. Her birth name Natalie Elise Guercio and her star sign are Capricorn.

She has a brother Paul, who is an author. She is of Italian descent. Natalie graduated from Empire Beauty School in 2004.

Earlier, Natalie Guercio worked as a Freelance, Hair Stylist, and Makeup Artist. Natalie appeared on reality TV show mob wives on seasons 4 and 5. This show follows a group of women after their family members were arrested for crimes connected to the Mafia.

She has appeared in movies and series including “By Deception”, “Clinton road”, “The Neighborhood”, “Wasted Talent” and “Turkey’s Done. This TV personality also released a song ‘Delicious‘ in 2014.

She was featured in the music video ‘Can’t Say Love’. Guercio has her own organic haircare line ‘Hair on Fleek‘. She promotes her women’s empowerment and targets millennials with interests similar to her.

Her family generations have been running Carto Funeral Home since 1952. She began running the funeral home alongside her granny in 2011.

This home is well-known among mob members and members like Michael Ciancaglini, Frankie Baldino and Anthony Pungitore have been laid to rest using their services. She is a domestic abuse advocate that helps women leave an abusive relationship.

She had been fired from the sixth season of ‘mob wives and was blamed for her inappropriate comments during the previous season. Karen Gravino claims Guercio is racist.

She was involved in controversy following a rough life during mob wives’ seasons. Natalie was suffering from meth addiction that caused her the hit reality show. She turned to Crystal Meth to help herself from depression. The media also reported that Guercio was dating a married man.