Moving on to her personal life, she is a married woman. Gulbis was married in 2013 to Josh Rodarmel, her boyfriend. She is very happy with her spouse and no any issues driving to divorce or separation has been spotted till date. They have no any child till now. Prior to being in love affair with Josh, she was in a relationship with a professional golfer, Dustin Johnson. He is three years longer to Natalie. Johnson had refused their relationship for several times. However, Natalie had talked about her affair with him in several of her interviews. 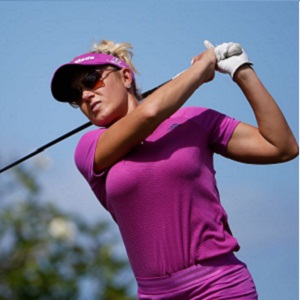 As far as my journal, I want to share tour life with my fans

Hawaii was beautiful of course, we played at Turtle Bay an amazing resort right on the ocean.

Who is Natalie Gulbis?

Natalie Gulbis is an American professional golfer. She is currently playing on the U.S.-based Ladies Professional Golf Association (LPGA) Tour.

Gulbis was born on January 7, 1983, in Sacramento, California. Her nationality is American and her ethnicity is Latvian. As of 2021, she is 38 years old.

Her birth name is Natalie Ann Gulbis. She was born to John Gulbis and Barbara Gulbis as their only child. Gulbis started finding interest in the game at the early age of four.

By the time she reached age seven, she had won her first tournament, and at age ten, she reports she was breaking par. She played in her first LPGA Tour event in 1997 as an amateur at 14.

Gulbis was the top player at the Granite Bay High School from where she graduated at age 16. She then accepted a golf scholarship to the University of Arizona.

Gulbis had begun her career early from her high school days. She left college to turn a professional in July 2001 at 18. At the LPGA Final Qualifying Tournament in October 2001, she finished tied for third to earn her card for the 2002 season.

Although Gulbis did not win a tournament until her sixth season on tour, she finished sixth on the LPGA money list in her fourth season with over $1 million in earnings in 2005. She placed in the top 10 in four consecutive major championships from the 2005 LPGA Championship at the 2006 Kraft Nabisco Championship. Her first professional win came at the 2007 Evian Masters in France.

Considered a sex symbol in the LPGA, she released a 2005 calendar, just before the 2004 U.S. Women’s Open, which featured her not only playing golf but also in striking poses in swimwear. The USGA barred it from being sold at the event, deeming it inappropriate. Gulbis also posed for the November 2004 issue of the magazine FHM; she has endorsement deals with McGladrey LLP, Adidas, Canon, SkyCaddie, MasterCard, Winn Golf Grips, Lake Las Vegas Resort, Lexus, EA Sports, etc.

In 2006, Gulbis began writing a monthly advice column in FHM. In November 2005 a reality TV show, The Natalie Gulbis Show, made its debut on The Golf Channel. Gulbis also has appeared on the 2007 version of the Tiger Woods PGA Tour by EA Sports. In August 2007 Gulbis appeared on the August/September cover of Sactown Magazine.

Gulbis appeared on April 28, 2009, in an episode of The Price Is Right as a Showcase theme. She also participated in playing Hole in One, Sports Jobs with Junior Seau. In 2010, she appeared on the tenth season of CSI: Crime Scene Investigation. Gulbis appeared in the 2012 Sports Illustrated Swimsuit Issue wearing only body paint.

She contracted malaria during the HSBC Women’s Champions tournament in Singapore in late February 2013 and missed a tournament while recovering.

Natalie Gulbis: Salary and Net Worth

She has a net worth of $4 million and her salary is not revealed yet.

There had been rumors that Dustin Johnson was Dating Gulbis, which he denied. Likewise, she also has been dragged into controversies regarding her skimpy photo shoots. Some instances include body paint photoshoot, for the calendar, etc.

Natalie has a height of 5 feet 9 inches. Her body weighs 57kg. She has blonde hair and blue eyes. Furthermore, her body measurements are 36-24-36 inches. Her bra size is 34B, shoe size is 8 US and dress size is 4US.