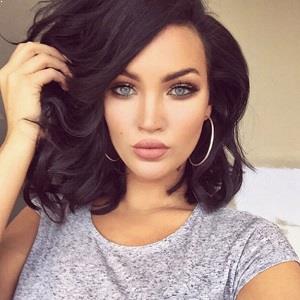 Natalie Halcro was previously in a relationship with former American footballer, Shaun Phillips. The pair dated since 2012.

Eventually, they broke up, and Natalie is currently possibly single.

On 4 Feb 2020, she gave birth to her first child. She is a girl and her name is Dove. However, the identity of the baby’s father is not revealed.

Who is Natalie Halcro?

Natalie Halcro is an American model, television personality, and a fashion blogger. She has endorsed brands such as Old Navy, Nissan, and Mazda.

Currently, she performs make-up and hair tutorials on her YouTube channel ‘Nat+Liv’ which has more than 250k subscribers.

Natalie was born in Langley, Canada on February 2, 1988. Her father Jim Halcro is a retired firefighter. Additionally, she has two biological siblings named Joel and Stephanie.

She became interested in the modeling world throughout her early life since her childhood years. In addition, she began her modeling career at just age 12. She is of Canadian nationality. Furthermore, she belongs to Caucasian ethnic background.

Information regarding Natalie’s educational background is not available at present.

Natalie Halcro began her modeling career at the early age of twelve. Later, by the time she turned 16, she had made a deal with NEXT, which signed her as a professional model. To date, she has walked the ramp in Milan, France, Cape Town, and London.

Apart from her work as a model, Natalie is the co-founder of a fashion blog named Jerome. Furthermore, she also started the blog with her cousin and fellow cast-mate of the WAGS, Olivia Pierson. She was also the part of the Vanderpump Dogs Foundation Gala that took place on November 3, 2016.

Natalie has not garnered any awards to her name as of now. She has not revealed her current salary. Similarly, there is no information relating to her recent net worth.

She became part of a controversy after she made a comment about her ex Shaun Phillips when she said she was pissed about seeing him on ‘ WAGS’. Currently, there are no rumors concerning her life and career.

Talking about her body measurement, Natalie Halcro has a height of 5 feet 8 inches. Additionally, she weighs around 56 kg. Furthermore, she has a body measurement of 34-26-35.

Her hair color is black and eye color is hazel.