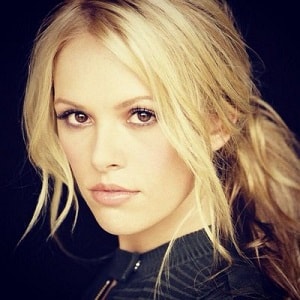 “Sometimes it gets frustrating when your shots don't fall. But we know we can always put it together.”

Natalie Hall is currently living her single life. Previously, she was in a relationship with her boyfriend Brandon Barash.

He is a famous American actor who is famous for his role in ABC Daytime soap opera ‘General Hospital’. They began dating in the year 2010 and separated in 2011 after being in a relationship for a year.

Who is Natalie Hall?

She was born on January 25, 1990, in Vancouver, British Columbia, Canada. Her birth name is Natalie Elise Hall and she is currently 29 years old. She grew up at her birthplace and later shifted to New York to pursue roles on Broadway. Her mother was a ballerina. Natalie grew up with his two brothers. She loved sports and was very competitive during her early ages. She was also fond of playing soccer and grew up playing on an all-boys soccer team.

Natalie holds Canadian citizenship but her ethnicity is unknown.

She took training Academy of ballet and graduated with honors of distinction in dance at the age of 16.

She portrayed the role of Val in the Broadway production of ‘A Chorus Line’ which helped her to win an Ovation award. After that, she made her way towards New York City to pursue her dreams of Broadway and TV stardom. In 2010, she again relocated to Los Angels.

Natalie has cast the main role of Colby Chandler in the soap ‘All My Children’.  She filmed her first scenes in mid-October just before the show relocated to L.A. She appeared for the last time in the show on September 23, 2011.

It was announced on June 29, 2011, that she would be replacing Natalie Floyd as Hannah’s soon-to-be stepsister, kate Randell in the series ‘Pretty Little Liars’. She portrayed that role until 2012. After that, she portrayed the role of Ellie King nee Davis in ‘Love’s Christmas Journey’ in 2011.

After two years, she was cast as Taylor in The CW series ‘Star-Crossed’. She joined the cast of HBO’s ‘True Blood’ for its final season in which she made her appearance as resident villain Sarah Newlin’s newly turned vampire sister, Amber Mills.

In 2014, he guest starred in the USA Network medical comedy-drama ‘Royal Pains’ as Hope and later appeared as Lucy in the CW series ‘Charmed’.

Natalie is also active in the field of music. She performed ‘Better with You’ in the film ‘Rising Stars’ and also featured in the song ‘Free To Fall’. She is also the lifetime member of The Actors Studio.

The 29 years old actress has not been awarded and nominated for her work till date.

She has an estimated net worth of around $300,000 and she has earned that from her professional career. However, her income and salary are under review.

There was a rumor regarding her pregnancy as she was spotted with a prominent stomach bulge on March 19, 2019, but she has neither confirmed nor denied the rumor.

Also, other rumor was that her friend and actress Ruby Rose paid an emotional tribute for the demise of her but later it turned to be completely hoax and she is still alive.