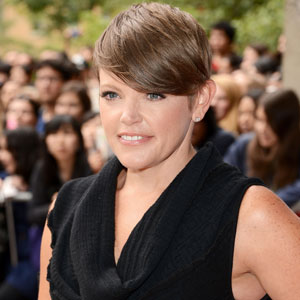 The short hair fits my personality more. I think maybe, with long hair, it was a role - I was playing dress-up a bit

It's very scary to me that people actually think we should just follow our leaders. If we can't learn from our history, we're nowhere.

Natalie Maines is currently in divorce proceedings with Adrian Pasdar. She was married to him for 17 long years since June 24, 2000.

Prior to this relationship, she was married to college boyfriend, Michael Tarabay. They married in 1997 and separated two years later without having any children.

They divorced revealing the reason as irreconcilable differences. Currently, she is in the process of finalizing her divorce with Adrian and going through a rough period in her life.

Who is Natalie Maines?

Natalie Maines is a singer-songwriter and activist who hails from America. She gained a lot of popularity and attention as a lead vocalist for the female alternative country band the Dixie Chicks.

Astoundingly, she earned 13 Grammy Awards till now with the band.

Talking about her early life, she was born as a daughter of Lloyd Maines and his wife Tina May Maines on October 14, 1974. She experienced her childhood in Lubbock, Texas, U.S. She was raised in that place alongside her sister.

Her father was a successful musician and producer which influenced her to develop an interest in music. Her childhood was full of luxury and comfort due to the wealth and fame that her father brought.

Regarding her education, she attended Williams Elementary School in Lubbock to complete her early schooling. After that, she completed her high school education from Lubbock High School in 1992.

Natalie Maines gave a start to her career as a background vocalist on Pat Green’s debut album, Dancehall Dreamer. Later on, she joined an all-female country music band Dixie Chicks at the age when 21 years old. Eventually, she replaced Laura Lynch as a lead singer for the band.

Moreover, she was the songwriter on all 14 tracks of their album, Taking the Long Way in 2006. Subsequently, it became an instant hit topping the Billboard 200.  a Grammy Award for the track,  Not

She has received many awards but her biggest achievement is Grammy Award for the track, Not Read to Make Nice.

Additionally, she performed with numbers of artists like Neil Diamond, Yellowcard, Charlie Robison, Ben Harper, Patty Griffin, Pete Yorn, Eddie Vedder, Stevie Nicks, and Pat Green. In 2013, she released her debut solo album called “Mother” on the 7th of May, 2013. In the songs of this album, it shows feminism, motherhood, and painful relationships.

The exceptional musical talents she carries amassed her a lot of recognition throughout her career. in return, she earned a lot of fortune and wealth skyrocketing her net worth. Thus, her net worth is $50 million as of now.

During her entire career, She has been in many rumors and controversy due to frank personality. Her behavior of speaking what she feels pulled her to controversies and rifts. On one occasion, she commented on the invasion of Iraq by the United States saying,” Just so you know, we’re on the good side with Y’all.

We do not want this war, this violence, and we’re ashamed that the President of the United States is from Texas.” She didn’t express any guilt regarding her statements saying it was made out of frustration.

Natalie Maines looks absolutely stunning and gorgeous with her well-maintained body. She has a body structure with a decent height of 5 Feet 3 Inches (1.6m) and weighs 62 kg.

She has blonde hair and blue eyes.

Also get to know more about Bob Geldof, Carly Simon, and Melissa Etheridge.