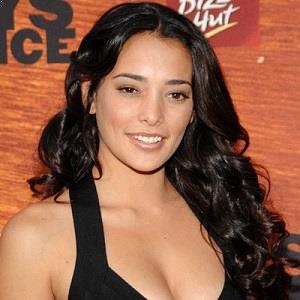 Cubanas are very strong women. So don't mess with us, don't take us for granted!

Being Latina for me is also being a strong woman.

I have to get the whole sense of the guy for me to be turned on by him, for me to actually like him. I like someone that has motivation and is really dedicated to something.

I have to represent. I feel proud to have a culture that's different and proud to be a Latina. We're not all categorized as one type of person there's people from everywhere doing different things who have different types of cultures. Being Latina for me is also being a strong woman.

What is the relationship of Natalie Martinez?

Natalie Martinez has not revealed information regarding her past and present relationships to the public.

At present, she is believed to be single. She does not have children from any of her relationships.

Who is Natalie Martinez?

Natalie Martinez is an American actress and model. People know her as the spokesmodel for JLO by Jennifer Lopez, and for her role in the 2008 feature film ‘Death Race’. Furthermore, Natalie Martinez has appeared in several music videos and telenovelas.

Martinez was born in Miami, Florida on July 12, 1984, to parents Odalys Nunez and Manuel Martinez.

Most of the information relating to her early life and childhood years is not available at present. She is of Cuban-American nationality.

Furthermore, she belongs to the Cuban ethnic background. She was interested in the world of modeling since the early age of 15.

Martinez initially appeared in ‘Fashion House’ as Michelle Miller in 2006. Next, she portrayed the role of Pilar Martin in the TV series ‘Saints & Sinners’ in 2007. Since then, she has appeared in numerous movies and television series. She has more than 20 credits as an actress.

Additionally, some other movies and television series that Martinez has appeared in are ‘Keep Watching’,  ‘From Dusk Till Dawn: The Series’, ‘Message from the King’, ‘Kingdom’, ‘American Dad!’, ‘The Land’, ‘Secrets and Lies’, ‘Matador’, ‘Under the Dome’, ‘CSI: NY’, ‘Magic City Memoirs’ and Death Race’ among others.

She recently starred as Detective Theresa Murphy in the Fox police drama ‘APB’, which was canceled on May 11, 2017, after one season.

Martinez has not revealed her current salary. Furthermore, she has a net worth of around $2 Million at present.

There was a rumor that Martinez was in a relationship with American Actress Nadine Velazquez. This rumor has not been confirmed by any one of them.

Additionally, Martinez has successfully kept her life away from the mainstream media spotlight.

To date, she has not been part of any notable controversies. Additionally, currently, there are no rumors concerning Martinez’s life and career.