American media personality who came to international attention when she gave birth to octuplets in January 2009.

Nadya Suleman married Marco Gutierrez and got separated in 2000.

Their divorce reason was that she lacked giving birth. She has four daughters and ten sons. 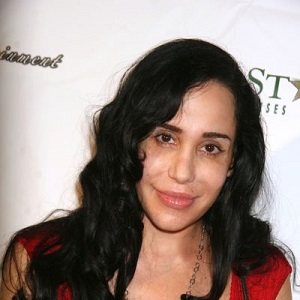 I was looking at myself, and acknowledged that I wasn't in love at all with him [husband]. I was in love with having children

The majority of people do not accept my choices

I personally do not believe I'm irresponsible. Everything I do revolves around my children.

Who is Natalie Suleman?

Natalie Suleman is an American media personality who came to international attention when she gave birth to octuplets in January 2009.

She was born on 11 July 1975 in Fullerton, California, USA. Her octuplets are only the second full set of octuplets that was born alive in the United States.

Natalie Suleman was born on 11 July 1975 in Fullerton, California, USA.

She is an American Citizen of Iraqi, and Lithuanian Ethnicity.

Dr. Michael Kamrava was her supervisor.

She gave birth to her first child in 2001. Her first child was a boy and she delivered a girl in 2002. And with further IVF treatments, she gained additional consecutive pregnancies and had a total of six children including a set of fraternal twins.

She let it out public in 2008 that she had six embryos left from her last IVF treatments and so she had the embryos transferred into her uterus at one time while the rule says two or three at the most.

Defending her act she reasons that she did so to protect the frozen embryos. When Nadya Suleman gave birth to Octuplets in January 2009, the international arena got attention from her.

The Suleman octuplets are only the second full set of octuplets to be born alive in the united states.

After Nadya  Suleman was captured by the public eyes as a mother of octuplets, she then appeared on many television shows, starting with February 2009.

It was an interview with Ann Curry. After then she was appeared later in March on Dr.Phill alongside fellow guest Gloria Allred. In 2010, the octuplets celebrated their first birthday. She has made many television appearances.

In February of 2010, she was featured in the magazine Star. Her interview including pictorials concerning her weight loss after delivering octuplets was focused.

It was the summer of 2012 when Suleman appeared in the adult film “Octomom Home Alone” produced by Wicked Pictures this adult movie was released on June 20, 2013.

The film is the sole of Nadya Suleman in a solo scene with the aid of sex toys. Her adult movie “Octomom Home Alone”, produced by Wicked Pictures, was awarded in the category  Best Celebrity Sex Tape at the AVN Awards ceremony held in 2013. After then she began to work as an adult entertainer dancing in men’s clubs.

According to rumors, there was a rumor that she died when she was diagnosed with stage four ovarian cancer.

As she gave multiple births, it led to controversy in the field of assisted reproductive technology.

“…sometimes you just have to go the extra mile on your own”: Nischelle Turner’s training years, her ambitions , inspiration and her undying love for New Orleans: Read on it here!