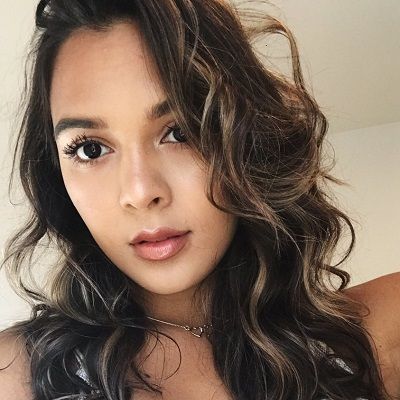 Natalies Outlet is a married woman. She exchanged vows with another YouTube star HeyItsDennis in Nov 2017. Outlet saw Dennis first time in 2011 and after that, they started to see each other often.

Then in May 2017, this couple exchanged rings with each other. They together have hosted a shoe called the Natalie & Dennis Show.

Natalies Outlet is an American social media personality. She is known for her DIY, beauty, pranks, and lifestyle videos on YouTube.

She was born as Natalie Alzate on March 8, 1994, in Chicago, Illinois, United States. Her mother’s identity is not disclosed and her father’s name is also unknown.

Regarding the educational background of her, she attended Valencia College and completed her graduation in 2014.

Then she gained a Bachelor’s degree from the University of Central Florida in Marketing.

Natalies Outlet entered the media world in the year 2014. Since then, she has made outstanding progress in impressing viewers through her content.

At first, Natalies started her YouTube channel. The channel was made on Aug 13, 2014, and has around 8.17 million subscribers. It contains videos related to makeup, beauty, DIY, pranks, and lifestyles.

The other popular videos of Outlet are How to Fall Asleep FAST When You CAN’T Sleep! 10 Sleep Life Hacks!, our married morning routine♡ Natalie & Dennis, 11 PRANKS FOR BACK TO SCHOOL!, etc.

Natalies Outlet is doing great with her professional and personal life. Till now, she has not been in any controversy or rumors.

Talking about earnings, this media personality has an estimated net worth is $500 thousand.

Talking about Natalies Outlet’s body features, she has dark brown eyes and dark brown hair. She stands with a height of 5 feet 5 inches and a weight of 52 kg.

Natalies Outlet is active on social networking sites. On Facebook, she has around 19k followers and this account was made on Sep 14, 2014.

Moreover, she is very popular on Instagram where she posts photos of her. This account has more than 809k followers.