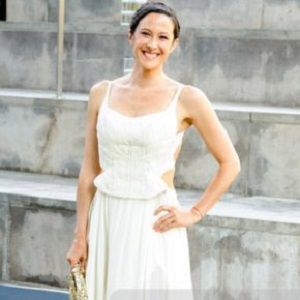 Natane Boudreau is an unmarried woman till now. She has been in a few relationships in her past. She dated the American businessman Damon Dash at the beginning of her career. The couple was together for a year in 1999. After that, she dated the American basketball star Reggie Miller in 2001. The couple broke up later that year. Since then, she has not been in any relationship till now. There is no record of her other relationship. According to the records, she is possibly single at the present time.

Who is Natane Boudreau?

Natane Boudreau is an American fashion model and actress. She was discovered by the owner of Click Model Management, who signed her on to do numerous ads for Calvin Klein. As a model, she was filmed as herself in the highly acclaimed fashion documentary, Unzipped.

Natane Boudreau was born on 5 May 1976, in New York City, New York, USA. She is an American by nationality but her ethnicity is Caucasian.

She grew up in Upper West Side of Manhattan with her parents. Her mother was a prominent fashion creative director and her father was a professional dancer. She was trained at Royal Academy of Dramatic Arts in London, UK, and William Esper Studios in New York City.

She attended the Bank Street School of Education. She also enrolled at Columbia Preparatory School. She was discovered by the owner of Click Model Management at the age of three. He signed her on to do numerous ads for Calvin Klein.

Natane began her modeling career at the age of three. She began her career appearing in ads for Calvin Klein. She posed several times for the photographer Bruce Weber. She was also photographed from the ages of 3 to 5 in several ads and editorials shots.

She made her acting debut playing a small role in Woody Allen’s Radio Days in 1987. She began a full-time modeling career at the age of 17. She began rising in the field of modeling. Her success took her all over the world including New York, London, Milan, and Paris. She posed for Calvin Klein, Chanel, Gucci, Versace, Dolce and Gabbana, Donna Karan, Ralph Lauren and Marc Jacobs. As a model, Natane was filmed as herself in the highly acclaimed fashion documentary, Unzipped, directed by Douglas Keeve.

Boudreau retired from the runway in 2003 and quickly landed a role in the independent film, The Pink House in which she played the role as Chloe. She also appeared in the movie 5 Up 2 Down, in which she played Teresa. In late 2003, she played Puck in Shakespeare’s, A Midsummer Night’s Dream. During her acting career, she co-founded Still Point Film Company. She has been seen in numerous national network commercials including Diet Coke, Advil, Samsung, and Pillsbury.

Natane Boudreau: Salary and Net Worth

Unlike other celebrities, Natane is not rumored to have hooked up with any celebrity at the present time and she has not been in any controversy in her entire life.

Natane has dark brown hair and dark brown eyes. Furthermore, there are no details regarding her body measurements.