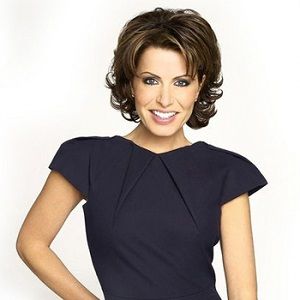 I was so nervous before going out there

As a journalist, my job is to be dispassionate. Suddenly to be the centre of a story and to be crying, it made me feel very insecure

The Nazi murder squads just wouldn't waste a bullet on a child. I just couldn't process that. I couldn't handle it.

Natasha Kaplinsky is married to Justin Bower, a private equity official from London on 21 August 2005. They first met on a blind date six months ago.

Natasha lives in London with her son, Arlo, born in September 2008, and daughter, Angelica, born in April 2010. and her husband.

She manages time for her family although she has a busy schedule of broadcast and corporate work and guest appearances.

Who is Natasha Kaplinsky?

Natasha Kaplinsky is one of the famous British newsreader, television presenter and an actor. She is popular for her work as a newsreader on Sky News, Channel 5, ITV News and BBC News.

She is also currently involved in ITV Network as one of the anchors.

She was born to father Raphael Kaplinsky, an exiled Jewish South African Professor of international development and mother Catherine Kaplinsky, a psychotherapist.

Her grandparents were Jewish originated from the town of Slonim and then immigrated to South Africa in 1929. Although she was born in Brighton, she spent her early life in Kenya and later returned to the United Kingdom.

She has British nationality and her ethnicity is Caucasian.

She attended her high school at Ringmer Community College until the age of sixteen and then moved to Varndean College in Brighton.

Then after, she graduated with a degree in English from Hertford College, Oxford in 1995.

Natasha Kaplinsky started her first job in the press office of Labour Leaders Neil Kinnock and John Smith. Then later, she started to present out in a youth chat show, F2F in 1996 with co-host Sacha Baron Cohen and then moved on to early morning news bulletins at Meridian.

Again, in 1999, she moved to ITV’s London News Network and hosted London Today and London tonight and a political program known as Seven Days. After a year, she again moved to sky news and co-presented a show called Live at Five with Jeremy Thompson and a breakfast news program called Sunrise.

She was promoted in the news channel from time to time and she worked in many news channels in various positions. She was nominated and also won for Best Newscaster/Reporter of the year 2005 for the Television and Radio Industries Club Award.

Natasha Kaplinsky: Salary and Net Worth

This multi-talented woman has a successful career with decent earnings. Her net worth is estimated at 5 million dollars.

Natasha told in an interview with The Daily Mirror that she was completely forced out to take part in BBC TV first series of a talent show in 2004 although she made excuses not to take part in it.

She has blue eyes and dark brown hair. Her shoe size is 8 (UK).