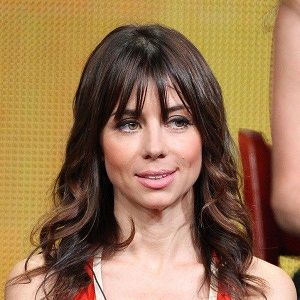 I used to think I liked older men, then I realized I was just hungry.

It's very hard to give the illusion of New England money while riding on mass transit.

On talking about her relationship, she is a married woman. She has tied a knot with Moshe Kasher, a comedian in 2015. The couple has been blessed with a child born in February 2018. But the name of the child has not been disclosed to the media yet.

Previously, she had an affair with comedian Duncan Trussell from 2011 to 2012. However, their relationship could not last long and got separated due to personal reasons.

Currently, she settles along with her husband and a child in Los Angeles, California with no signs of divorce or any other rumors.

Who is Natasha Leggero?

Besides, She came to limelight after appearing on MTV’s The 70s House (2005) as the host, and on Chelsea Handler’s late-night talk show Chelsea Lately for her tenure as a regular roundtable panelist.

Leggero was born on 26th March 1974 in Rockford, Illinois, the U.S. She holds a mixed ethnicity i.e., Swedish and Italian. However, she mentioned that a DNA test revealed she is from 6% Sub-Saharan African ancestry.

Her parents raised her Roman Catholic but later on, as an adult converted to Judaism. Her parents got divorced while she was a child. The details of her parents and their occupation are currently unavailable.

Further, during her childhood, she started performing in plays in Chicago at the age of 10.

In discussing her educational background, she joined  Rockford East High School and later on went to Illinois State University after graduating from High school. However, she spent a semester studying in England after studying for two years in University.

Moreover, She joined Hunter College and graduated from there in 2000 with a B.A. in Theater criticism.

In early days, she served at a grocery store during her teenage period. She, later on, captured an unaired pilot called The Strip from Reno 911! for NBC along with Ben Garant and Tom Lennon. Another, she appeared on the 2010 season of NBC’s Last Comic Standing as a judge alongside Greg Giraldo and Andy Kindler. Besides, she performed in NBC’s 2011 sitcom called Free Agents as Emma. Other than that, Leggero appeared along with comedian Duncan Trussell in The Lavender Hour podcast as a co-host.

In addition, she provided her voice for Callie Maggotbone from 2010 to 2012 on the animated series entitled Ugly Americans. Then after she also appeared as Nikki in six episodes of NBC’s Are You There, Chelsea?  in 2012. Also, she performed in the web series Burning Love, a spoof of the TV series The Bachelor and The Bachelorette as the sex-obsessed Haley. Additionally, Leggero appeared on Comedy Central in an episode of the Drunk History television series in 2013.

Furthermore, Leggero took part as one of the Roasters in the Comedy Central Roast of James Franco on September 2, 2013.

Natasha Leggero: Rumors and the Controversies

Though her successful career, she has not been any parts of the controversies yet. She has been keeping most of her personal details secret and far from the media.

Thus, there are currently no such records available related to her rumors and controversy.

Natasha Leggero: Salary and the net worth

She earns a huge amount of salary from her career but currently has not disclosed to the media. While she has an estimated net worth of $2 Million that he earns from his profession.

A writer has an hourglass-shaped body with the body statistic of 34-24-35 inches including the height of 5 feet 1 inch and body mass of 50Kg. Her shoe size is 5 (US) while her dress size is 4. She possesses brown eyes and highlighted hairs.

Also, read the bio, salary, the net worth, rumors, controversy, relationship, and the family of an actor, Jon Voight.