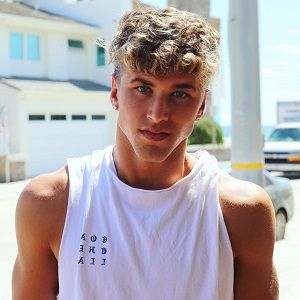 The 21-year-old American model, Nate is currently single. Moreover, he has never seen with anyone in the public and media to date. Although, he has been posting several photos of him along with some girls on his Instagram account. However, he has not disclosed the news regarding his relationship. It seems he has total focus on his career rather than stuck in any relationship stuff. Currently, Nate is enjoying his single life and living elegantly.

Who is Nate Garner?

Nate Garner is an American model and Instagram star. Currently, he has almost 3 million followers on Instagram as well as more than 718k subscribers on YouTube. Furthermore, he has also signed with Wilhelmina Models LA.

Nate was born on December 22, 1996, in Brea, CA, United States of America. Talking about his nationality, he is American and his ethnicity is unknown. Furthermore, he has two siblings, a brother Benji and a daughter Bella. Concerning in his childhood and education, there is not any information regarding his educational background.

Nate began his career by posting various videos on Vine. Initially, he used to post videos from his car, using the hashtag #natefromhiscar. His first Vibe video was My thought on twitter when I see the booty….. DAMN on May 3, 2014. Later in 2015, he started modeling. Moreover, he also signed with Wilhelmina Models LA. Currently, he is a famous Instagram celebrity with almost 3 million followers. Additionally, Nate is also a YouTube in which his channel, Nate Garner has earned more than 718k subscribers. His famous YouTube videos are INSANE WHAT ARE THE ODDS and GROSSEST EGG ROULETTE CHALLENGE EVER.

Being a famous Instagram star and model, he earns a handsome amount of money from his profession. However, his salary and net worth are unknown.

So far, he has not won any awards in his career. Although, he has been doing a great job and his works have been loved and appreciated by many people around the world.

Once, there was a rumor that, he got into a fight with Alex Aiono. However, Nate denied the news. It was also said that he was ruled out of the tour with Dolan Twins. Besides this, he has never faced any controversy in his career to date.

Nate has a height of 6 ft 1 inch and his weight is unknown. Moreover, he has a pair of gorgeous blue eyes and brown hair. Besides this, there is not any information regarding his other body measurements.