Nathalie Emmanuel is a famous actress who was dating English actor Devon Anderson previously for 7-8 years before calling it quits. 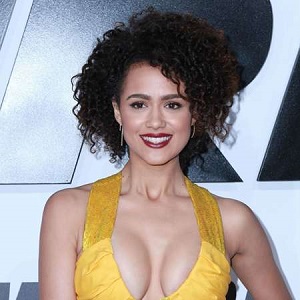 I'm a bit of a 'Throny,' as I think the 'Game of Thrones' fans refer to themselves

With 'Game of Thrones,' there are no real limitations

I was a huge fan of 'Game Of Thrones.' I hadn't read the books but had watched the series from the beginning.

Nathalie Emmanuel hasn’t been married till now. But she was in a relationship with English actor Devon Anderson. They started dating in 2010 but by the end of 2017 or the start of 2018, it was over.

As of now, she is probably single.

Who is Nathalie Emmanuel?

England-born Nathalie Emmanuel is a film actress. Presently, she is also famous for starring in films like “Maze Runner: The Scorch Trials”, “Furious 7”, and others.

Similarly, she is also popular for starring in the TV series, “Game of Thrones”. She is portraying the character of ‘Missandei’ in the series since 2013. Additionally, Nathalie is also a popular TV actress. As an actress, she is active in this occupation since 2006.

Nathalie was born in Southend-On-Sea, in Essex in England. She was born Nathalie Joanne Emmanuel on March 2, 1989. Her mother is Dominican, and her father is half saint-Lucian and half English.

She had a passion for drama and art from a very young age.

Nathalie Emmanuel’s career started at the age of 10. She starred in the West End production of the musical “The Lion King”. She played the character of ‘Young Nala’ in the show. Discussing her TV career, she debuted in 2006 in a soap opera, “Hollyoaks”. She portrayed the role of Sasha Valentine in it from 2006 to 2010. Her portrayal of Missandei in “Game of Thrones” from 2013 to the present made her extremely famous.

She makes big bucks from her TV series and films. As of now, her salary has risen up for sure. Therefore, she has made some net worth. As of now, it is estimated at around $1 million.

Nathalie is a young and talented actress. She likes to pay full attention to her work. Eventually, this helps to maintain her distance from media controversies. Similarly, she has no intention of getting dragged into public criticism. That’s why her public image is clean. As a result, there are no rumors regarding her life as of now.

Nathalie Emmanuel has an average height of 5 feet 7 inches. She weighs around 61 kg or 134½ pounds. Additionally, she has a body measurement of 36-26-35 inches.

Similarly, her dress and shoe sizes are 8 and 7.5. Her hair color is black and her eye color is dark brown.