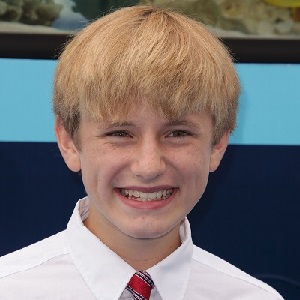 I was a big fan of Indiana Jones

then I realized he was kind of a fake hero. The real heroes are the people who work hard and do their stuff right, like firefighters and policemen

I want to keep on progressing. I definitely think acting is a long process to be one of the greats like Morgan Freeman or Jack Nicholson

I don't even think I'll see all of 'The Mist' until I'm 18. I'm going to the premiere, but I'll close my eyes during the scarier scenes.

What is the relationship of Nathan Gamble?

He is a child and he has not been in any relationship till now.

Who is Nathan Gamble?

He is also famous for appearing in the TV films such as on CSI, House M.D., and Without a Trace.

What are the birth facts of Nathan Gamble?

Nathan Gamble was born on January 12, 1998, in Tacoma, Washington, USA. He is an American by nationality and is of English and German ethnicity.

He is the son of Christie Gamble and Greg Gamble. His parents are theater directors who run a drama camp for children. Nathan has not disclosed any information about his educational background.

He was interested in acting from an early age and he dreamed of being an actor as a young child.

Nathan began his acting career at the age of eight. His first acting role was as Mike Jones in the 2006 movie Babel.

The following year, he made appearances in movies like Deeply Irresponsible, Diggers, and The Mist. He made his TV acting debut playing Kobe Farentino in an episode of CSI: Crime Scene Investigation in 2007.

In 2007, he was nominated for the “Young Artist Award for Best Performance in a Feature Film – Young Actor Age Ten or Younger” for his performance in Babel.

In 2012, he was nominated for the “Young Artist Award for Best Leading Young Actor in a Feature Film” for his performance in Dolphin Tale. Despite his young age, he has been a popular actor in the industry.

Nathan Gamble: Salary and Net Worth

Is Nathan Gamble involved in any rumors and controveresies?

It seems he is doing his best job without harming others for which he hasn’t been a part of controversy yet. Also, he is so young to be a part of rumors and controversies.

Moving Towards his body measurements, he has blonde hair color and his eye are brown.

He has a good height of 5 Feet and 4 Inches (1.63m) but his body weight, shoe size, and other body measurements are unknown.

Furthermore, also find out more about the early life, career, net worth, relationships, and controversies of a teen actors like Frankie Jonas, Sean Ryan Fox, and Ty Panitz.