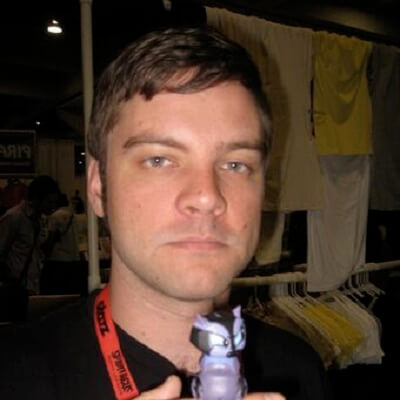 Nathan Hamill is currently in a relationship. He is dating Em Harris. She is a content creator and singer. The couple revealed on March 4, 2020, that they had completed seven months of togetherness. As of June 2020, they have now been together for over 10 months.

There is no information about any of his past relationships.

Who is Nathan Hamill?

Nathan Hamill is a British artist and illustrator. Hamill was famous since his birth as the son of English actor, Mark Hamill who portrayed Luke Skywalker in the Star Wars film series.

Nathan Hamill was born as Nathan Elias Hamill on June 25, 1979, in London, England. As of 2020, his age is 40. He was born famous as the child of famous parents Mark Hamill (father) and Marilou York (mother). His father, Mark Hamill is an American actor and writer. He is famous for portraying the main character, Luke Skywalker in the Star Wars film series. At the height of the franchise’s popularity, Hamill was one of the most popular actors on the planet. Some of his other notable movie appearances include The Big Red One (1980) and Corvette Summer (1978). His mother, on the other hand, was a dental hygienist.

During the filming of Star Wars: Episode V The Empire Strikes Back, Mark was in Finse, Norway with his wife, Marilou who was several months pregnant. In case of premature birth, the couple had brought medical supplies and a giant teddy bear with them all the way to Norway. Nathan Hamill was born early on an important Monday morning on which Mark was meant to play a scene in which his character Luke Skywalker manages to grab onto an electronic weathervane after emerging from the underside.

Despite having stayed up all night, he arrived on time at the set to film.

He was his parents’ first of three children together. He has two younger siblings, Griffin Tobias (born in March 1983), and Chelsea Elizabeth (born in July 1988). His youngest sibling, Chelsea made a photographic appearance as an infant Axel Walker in The Flash.

Nathan Hamill started his career with a cameo appearance as one of the Royal Guards of Naboo in the 1999 film, Star Wars: Episode I – The Phantom Menace. It is an American epic space opera film produced by Lucasfilm, written and directed by George Lucas, and distributed by 20th Century Fox. The movie stars Liam Neeson, Natalie Portman,  Ewan McGregor, Jake Lloyd, Anthony Daniels, Ian McDiarmid, Kenny Baker, Frank Oz, and Pernilla August. It is the first installment in the prequel trilogy of Star Wars and begins the “Skywalker saga”.

He referred to his character as “Rehtul Minnau”, a name which was later canonized in the StarWars.com Databank. After his appearances in The Phantom Menace, he starred in an animated feature titled ‘Earth Day’ alongside his father.

He illustrated sketch cards for the Topps Star Wars Galaxy Series 4 trading card set in 2009. In the 2014 action-comedy movie, Office Ninja, he was a member of the Arts Department and worked as a sketch artist. In the 2012-13 series, ‘Weasel Town’, he worked as a writer in ten episodes, appeared as headline ghost in two, and was in the arts and music department.

Hamill has brown hair and a pair of blue eyes. There is no information about his height and weight.

Although there is no exact information about his net worth, sources estimated Nathan Hamill’s net worth in the region of $1 million – $5 million. On average, an artist earns over $55k per year in America. His father, Mark Hamill has an estimated net worth of around $18 million.

You may also like to read the Bio, Career, Body Measurements, Net Worth, Social Media, Relationships, and more about Lauren Sanchez, Emma Stone, Mackenzie Bezos, etc.