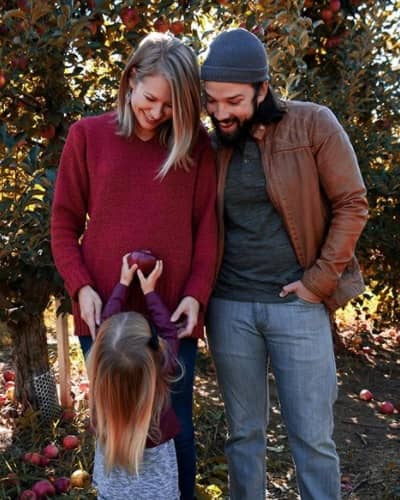 Nathan Kress and his wife London Elise Kress have happy news to share. After multiple miscarriages, the couple is finally expecting their second child. On 21st October 2020, they announced that their second daughter will arrive in 2021.

“We are having a baby! And it’s a girl! [London] is great. Everything is so much better this time around. Obviously, it’s all the classic pregnancy stuff. She’s doing really well…Yeah, we’re just waiting, feeling real impatient because now we just kind of want to get it over with.”

Kress and Elise are too excited about the upcoming baby. London is halfway through the pregnancy. London shared a picture with their daughter holding an apple. She wrote,

“We know nothing is ever certain, but what is certain is that no matter what, you are being fully celebrated by mommy, daddy & your big sister Rosie! Also, we know that everything happens for a reason, & you are that reason, my precious one. We cannot wait to meet you, baby girl.”

Nathan Kress and London Elise Kress walked down the aisle on 15th November 2015. It was an outdoor ceremony attended by his iCarly co-stars Miranda Cosgrove, Jennette McCurdy, and Jerry Trainor. Nathan proposed to her in May 2015 with a romantic sunset proposal near LA’s Angeles National Forest.

“Woah… jumped pretty quickly up to 900k over the last few days! Since it most likely had something to do with some recent, life-changing events involving the incredible lady pictured above, I thought it would be fitting to post this one. You guys… I found her. And I’m gonna love her for the rest of my life. For better or worse”

They met each other while filming Into the Storm in the year 2014. Together, they have a daughter named Rosie Carolyn Kress born on 21st December 2017. He announced the pregnancy on 12th July 2017 with a dad joke on Instagram.

How much is the net worth of Nathan Kress?

Nathan Kress has an estimated net worth of $1.5 million as per Celebrity Net Worth. Nathan has worked in films like Babe: Pig in the City, Pickled, Chicken Little, Magnus, Inc., Bag, NimBlingDit, Snowflake, the White Gorilla, Into the Storm, Tell Me How I Die, Alexander IRL, Breaking Brooklyn, 8 Bodies, and more.

Nathan Karl Kress is a young American actor, director, and former child model. Nathan always aspired to become an actor and has been acting since the age of four. He played the role of Freddie Benson on the Nickelodeon series ‘iCarly’ where he gained lots of fame. Read more bio…

Jeff Bridges, actor-musician reveals that he is diagnosed with lymphoma and will soon start treatment for it!
Tags : ‘iCarly’ Actor