Who is Nathanael Saleh Dating?

Nathanael Saleh is possibly single at the moment as he has not revealed his relationship status yet. He has never mentioned his girlfriend nor has been spotted in the public.

It seems like, he is more inclined towards his work and career rather than involving in relationships. 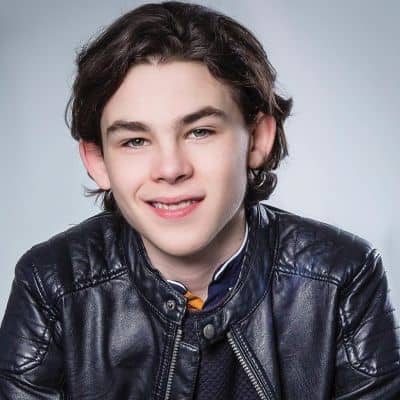 Who is Nathanael Saleh?

Nathanael Saleh aka Nathanael Isaac E. Saleh is a rising British actor. He is famous for portraying the role of John Banks in the 2018 musical film, ‘Mary Poppins Returns.’

16 years old British rising star, Saleh has been floating in the headlines since the release of the Netflix series, ‘The Last Bus.’

Nathanael Saleh was born in Redditch, Worcestershire, England on 22 April 2006. Saleh is 16 years old as of 2022 and holds British nationality. He is of Caucasian ethnicity having a Taurus birth zodiac sign.

He is a student of Worcestershire School but it is not confirmed whether he has completed his high school level or not.

His interest in acting grew, when he saw his elder brother, working as a theater artist in ‘Playbox’ and also worked with him.

At the age of 9, he made his small-screen debut by appearing as ‘Arthur’ in the two episodes of the American fantasy series, ‘Game of Thrones.’ While working on the series, he got to experience and an idea of film-making.

After that, he gave an audition for the character of John in the American musical fantasy film, ‘Mary Poppins Returns and was selected.  The movie earned him immense fame after its release on November 29, 2018.  Saleh appeared alongside Joel Dawson, Emily Mortimer, Pixie Davies, and Emily Blunt.

Following the recognition for his appearance in ‘Mary Poppins Returns’ in 2020, he landed as ‘Pink’ in the tv series, ‘The Letter for the King.’

In 2022, the actor is in the limelight for starring as ‘Josh’ in the Netflix, series, ‘The Last Bus.‘ He has shared the screen with Lauryn Ajufo, Moosa Mostafa, Daniel Frogson, Lara McDonnel, Carys John, and Ρhoebe De Silva.

The ten episodes containing the series aired on April 1, 2022.

The celebrity star, Nathanael Saleh has an estimated net worth that ranges between 1 to 5 million USD. His income/salary is still under review.

‘The Last Bus’ actor, Nathanael Saleh has not been part of any serious rumors and controversies.

As he is in his growing phase, he might get indulged in controversies in the upcoming days. If such info emerges, it will be updated as soon as possible.

Nathanael Saleh has still time to grow up and his body measurements might change after he becomes an adult. At the moment, the young celebrity star stands at the height of 5 feet 4 inches weighing around 50 Kg.

Moreover, seeing his picture, it is obvious that he has a fair skin tone along with a pair of hazel eyes and brown hair.