Updated On November 15, 2022 | Published By: sonika shrestha
Share this
Married 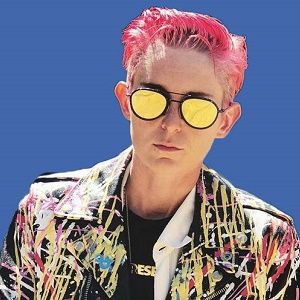 What is the relationship of Nats Getty?

Nats Getty is married to a sexy model Gigi Gorgeous on 12th July 2019 in Montecito, California.

The couple started seeing each other in the year February 2016. Gigi is also transgender. They met for the first time while modeling for her brother August’s brand. But in November 2016, the lesbian couple announced their breakup via Gigi’s Youtube channel.

Again in March 2018, the couple was caught smooching in public and their relationship again took a new turn. Getty proposed to her and she said “Yes!”

Who is Nats Getty?

Nats Getty is an American model, socialite, designer, artist, and LGBTQ rights, activist. Nats Getty is transgender. She is also an owner of the Strike Oil company which makes custom leather jackets.

Nats Getty was born on 30th November 1992 in Los Angeles, CA. Her full name is Natalia Williams but she uses her mom’s last name.

Her ethnicity is Caucasian and her nationality is American. She has a brother, August and she does not have any sisters.

When she was just 8 years old, she was sent to a boarding school in England. She used to love tree climbing, surfing, and skateboarding during her childhood.

Talking about education, Nats went to The Willows Community School and later attended a boarding school in England.

She was good at her studies and would achieve an A in all the subjects. But She was a very mischievous student and would be involved in one or the other problems.

After her schooling, she graduated from Mount Saint Mary’s University.

Nats is a creative designer and an owner of a custom leather jacket. The name of her clothing jacket brand is Strike Oil. Her attitude towards work is “f*ck what everyone thinks about you.” She is a model as well as an artist. She models for her brother August’s clothing brand, August Getty Atelier.

Her father is an owner of the Getty oil company which is worth over 5 billion dollars. So she has the advantage of pursuing what she wants to do as she grew in a very well-off family.

She being a transgender is a Los Angeles-based LGBTQ(lesbian, gay, bisexual, transgender, questioning, queer) rights, activist. She is an active member of LGBTQ rights and keeps attending the programs related to it. She is also the board member and brand ambassador of the Ariadne Getty Foundation, which belongs to her mother.

According to the sources of 2022, her net worth is estimated to be $30 million while her salary is unknown.

In Dubai, being transgender is considered to be illegal. Nats’ girlfriend Gigi when went to Dubai was detained for being transgender. Later, Nats came to his rescue for her after five hours. Gigi said that it was of “one of the scariest moments of (her) life.”

Nats have a lean body type with a height of 5 feet 9 inches and weight is unknown. She has short hair and her hair color is blonde and her eye color is brown. However, she keeps dying her hair. Her shoe size, dress size, etc. are unknown.