The couple started dating in the year 2005 as per the sources. In 2016, the couple got engaged.

After they started seeing each other, they never shy to flaunt their relationship in the public. They were often seen together in date nights, award shows, etc. 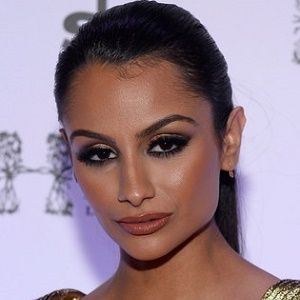 Who is Nazanin Mandi?

Nazanin Mandi is an American actress, singer, and model. She always aimed to be a performer since she was very young.

She was raised by an Iranian father (Ali Reza Mandighomi) and a Latin American mother (Luz Cecilia Saenz). Her ethnicity is mixed (Persian, Spanish, Mexican, and Native American) and nationality is American.

She does not have any siblings.

Nazanin started dancing when she was just 3 years old. She fell in love with dance since then and when she became 10, she started modeling.

She got the modeling offer when she was out having lunch with her mother at mill In-n-Out. Then she was soon signed by elite Wilhelmina Models.

There is no information on her educational background. Her school or college name is also unknown.

Nazanin Mandi started her career when she was just 10 years old. Her grace and love towards performing made her reach the heights in the industry. She was signed by elite Wilhelmina Models.

She was also signed by brands like Smashbox Cosmetics, Microsoft, Cosmo Girl, and Ecko Unlimited. Also, she was featured with other famous brands like Nume Hair Campaign, Stila Cosmetics, Under LA, Swimergie, Two in the Shirt, KUPA Nails, and Lovenci Clothing.

Then she was called in a show Rock Star Academy as a music expert. She has been starred in Disney’s ‘That’s So Raven’ and BravoTV’s ‘Shahs of Sunset.’

This model’s net worth is estimated to be around $10 million and her salary is not available.

Nazanin has been in the entertainment industry for a very long time. She has worked with one of the world’s leading brands. However, she does not have any rumors or controversies yet.

She wears a shoe size is 6.5 (US) and dress size is unknown.

It’s a Patch Up! Miguel and Nazanin Mandi confirm they’re back together 4 months after separation

Miguel is accused of sexual assault allegation! But he is Denying..What’s the truth? And there is another news,Good News! Is finally Getting Married to his Longtime Girlfriend?! Let’s Find Out All