Nazem Kadri is married to Ashley Kave. They walked down the aisle at Casa Loma in July 2018.

Their wedding was attended by his teammates. He shared a video of Mitch Marner, Morgan Rielly, Jake Gardiner, and Zach Hyman performing Dabke at one point in the night.

At his wedding, he wore a black suit, and his bride Ashley wore a long white wedding dress with a matching veil on top. Rachel A. Clingen Wedding & Event Design provided a floral and decor design to their wedding. 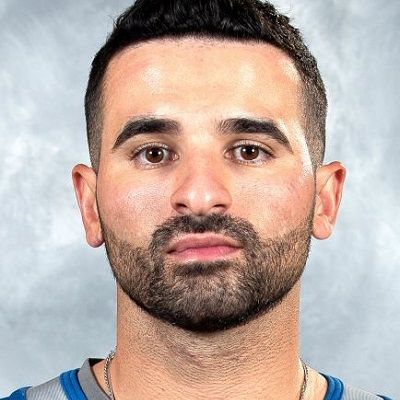 Who is Nazem Kadri?

Nazem Kadri is a Canadian professional ice hockey center. Nazem plays for the Colorado Avalanche of the National Hockey League.

On 4th December 2019, Sportsnet shared a video of Maple Leafs Honour Nazem Kadri with a Video Tribute In His Return To Toronto.

Nazem Samir Naz Kadri was born on 6th October 1990 in London, Ontario, Canada. He is the son of Sam Kadri and Sue Kadri. He was named after his grandfather.

He began skating at the age of two and played organized hockey at the age of four. When he was six years old he was suiting up for elite-level teams.

Nazem grew up playing in minor hockey for the London Jr. Knights of the MHAO’s AAA Pavilion League. In the year 2003, he participated in the All-Ontario Peewee Championships in Markham, Ontario.

Nazem began his OHL career with the Kitchener Rangers as he was selected in the 18th overall of the 2006 OHL Priority Selection.

He was traded to the London Knights in exchange for several drafts picks in the 2007-08 season. Similarly, after the 2008-09 OHL season, he was drafted by the Toronto Leafs in the first round.

After being drafted by Toronto Maple, he attended the training camp for the 2009-10 season and played in six pre-season games. On 19th March 2011, he played against goaltender Tim Thomas of the Boston Bruins.

He scored his first career NHL goal and was named AHL All-Star Game in 2012. On 19th January 2013, NHL play resumed after the 2012-13 NHL lockout was canceled and he made the starting roster for the Maple Leafs in the season opener.

On 11th September 2013, Nazem signed a two-year contract with $5.8 million contracts with Toronto. During the 2017-18 season, he scored his fourth career NHL hat-trick in a 6-3 win over the Columbus Blue Jackets.

On 1st June 2019, Nazem was traded to the Colorado Avalanche from Toronto Maple Leafs for the Sixth-round pick in 2020.

– For the 2007 Canada Winter Games, he played for Team Ontario and won a gold medal.

He has black hair and brown color eyes. Nazem is 6 feet tall and weighs around 88 kg.

You may also read about the age, parents, career, net worth, body measurement, and social media of Patrice Bergeron, Nate Thompson, and Vladislav Namestnikov