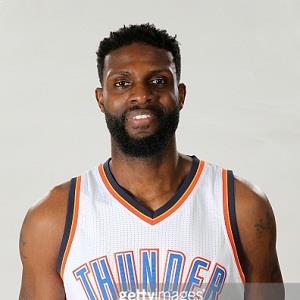 Riches are not from abundance of worldly goods, but from a contented mind

A person's true wealth is the good he or she does in the world.

Reflecting on a personal life of Nazr Mohammed, he is married to Mandy Mohammed. They got into a married relationship in the year of 2011. They have been blessed with one son Nasir and two daughters Amani and Sanna. He doesn’t have any extramarital affairs and he is living happily with his family. There isn’t any rumor on their separation of a married relationship. Being a celebrity, his personal stuff is always a matter of discussion and interest to the public.

Who is Nazr Mohammed?

Tall and handsome Nazr Mohammed is an American well-known professional basketball player.  He is currently a free agent who has played for different teams in the National Basketball Association (NBA). He used to plays from a center position.

Nazr was born on 5 September 1977, in Chicago, Illinois. He is of African American ethnicity and has an American nationality.

American professional basketball player Nazr Mohammed’s birth name is Nazr Tahiru Mohammed. His mother’s name is Mary Mohammed and his father’s name is Alhaji Na T. A. Mohammed. Since childhood, he has built up a strong interest in basketball games.

Nazr Mohammed started playing basketball in 1998. He started playing professionally after being selected by the Utah Jazz in the 1998 NBA draft. He was immediately traded to the Philadelphia 76ers where he played two and a half-season before he was traded.

He was traded to Atlanta Hawks in February 2001 where he set a career-high scoring 30 points in a match against Los Angeles Clippers on 5 November 2001. Then he was traded to New York Knicks and played the rest of the remaining 2004-05 season. San Antonio Spurs acquired him for the 2004-05 season and has won his first and only championship in 2005. On 17 March 2006, he tied his career-high scoring 30 points in a match against Phoenix Suns.

Mohammed was offered a four-year contract extension but he turned down the Spurs offers and signed with Detroit Pistons in July 2006. He was traded to Charlotte Bobcats on 14 December 2007 in exchange for Primoz Brezec and Walter Herrman. On 24 February 2011, he was traded to Oklahoma City Thunder where he reached the 2012 NBA Finals but lost to Miami Heat.

On 27 July 2012, he signed with the Chicago Bulls and retired on 9 October 2015. He came out of his retirement and joined the Oklahoma City Thunder on 5 March 2016. Onwards, he was released from the team making him a free agent.

He has a net worth of $25 million but his salary is not revealed yet.


Unlike other players, he hasn’t been in rumors but he was criticized when he said Derrick Rose will be the MVP again.

Nazr has a height of 6 feet 10 inches. His body weighs 113kg. He has black hair and dark brown eyes.