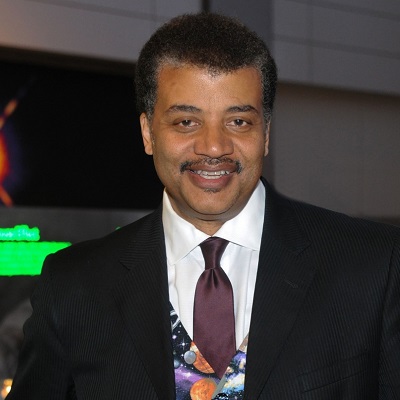 “UFO Doesn't Mean Aliens. UFO sightings happen all the time – maybe even today! What would happen if top-secret UFO information leaked from the government?”

"I already knew I wanted to become a scientist. But that afternoon, I learned from Carl the kind of person I wanted to become.": “My letter of application had been dripping with an interest in the universe. The admission office, unbeknownst to me, had forwarded my application to Carl Sagan's attention. Within weeks, I received a personal letter from him.”

“When I was a kid... there were scientists and educators on the staff at the Hayden Planetarium... who invested their time and energy in my enlightenment... and I've never forgotten that. And to end up back there as its director, I feel this deep sense of duty, that I serve in the same capacity for people who come through the facility today, that others served for me"

What is the relationship of Neil deGrasse Tyson?

Neil deGrasse Tyson and Alice Young married in 1988. Alice Young is a mathematical physicist. They met at a lecture at the University of Texas. Neil and Alice have 2 children, daughter Miranda, and son Travis.

Who is Neil deGrasse Tyson?

Neil is the Frederick P. Rose Director of the Hayden Planetarium at the Rose Center for Earth and Space in New York City.

Neil is the author of the series “Cosmos: A Spacetime Odyssey”. This is a follow-up of the 1980 series by the renowned astrophysicist Carl Sagan- “Cosmos: A Personal Voyage”.

His father Cyril deGrasse Tyson was an acclaimed sociologist. He was the Human Resource Commissioner for New York City Mayor- John Lindsay, and the first Director of Harlem Youth Opportunities Unlimited. His mother Sunchita Maria was a gerontologist for the U.S. Department of Health, Education, and Welfare,

Neil grew up in the Castle Hill neighborhood of the Bronx, and later at Riverdale with his siblings, an elder, and a younger one-Stephen Joseph Tyson and Lynn Antipas Tyson.

Neil studied in the best public schools in the Bronx. Thereafter he continued his high school education at Bronx High. Additionally,  he studied at Riverdale Kingsbridge Academy for some time. However, he went back to Bronx High School to study Science courses.

He participated in extra-curricular activities at Bronx High. He was the Captain of the wrestling team and the editor-in-chief of the Physical Science Journal.

Tyson’s research is focused on his observations in cosmology, stellar evolution, galactic astronomy, bulges, and stellar formation. In the course of his professional career, he held numerous positions at these prestigious institutions. Such institutions include the University of Maryland, Princeton University, the American Museum of Natural History, and the Hayden Planetarium.

1994 Tyson joined the Hayden Planetarium as a staff scientist

1995 Acting Director of the Hayden Planetarium

1996 Appointed Director of the Hayden Planetarium

He has penned several books which include:

2008 Merlin’s Tour of the Universe

1994 Universe Down to Earth

2000 One Universe: At Home in the Cosmos

2002 City of Stars: A New Yorker’s Guide to the Cosmos

2007 Death by Black Hole: And Other Cosmic Quandaries

2009 The Pluto Files: The Rise and Fall of America’s Favorite Planet

2016 Welcome to the Universe: An Astrophysical Tour, with Michael A. Strauss and J. Richard Gott

2017 Astrophysics for People in a Hurry

2018 Accessory to War: The Unspoken Alliance Between Astrophysics and the Military, with Avis Lang

2019 Letters from an Astrophysicist

During his course of work, Neil required funds for international research that was dear to his heart. He approached Professor R. Michael Rich who obtained funds from NASA and the ARCS Foundation to support Tyson’s doctoral research. This fund enabled Tyson to attend international meetings in Italy, Switzerland, Chile, and South Africa and complete his research.

Neil deGrasse Tyson –Awards and honors and net worth

2004, NASA Distinguished Public Service Medal for the Moon, Mars and Beyond Commission

2015 Public Welfare Medal from the National Academy of Sciences

2001 The Tech 100, Crain’s Magazine voted Neil as one of  the 100 most influential leaders in technology

2008 Discover Magazine’s “The 10 Most Influential People in Science”

In 2009, Katelyn Allers, a professor at Bucknell University alleged that Tyson touched her inappropriately at a 2009 American Astronomical Society gathering.

Thereafter, an anonymous woman alleged that Tyson made inappropriate comments to her during a 2010 holiday party at the American Museum of Natural History.

Then in November and December of 2018, Thchiya Amet El Maat accused Neil of inappropriate behavior. She accused Tyson of drugging and raping her and her sister in 1984 when they were students at UT Austin.

Ashley Watson, Tyson’s assistant on Cosmos alleged that in 2018, Tyson made inappropriate advances. She resigned from the position days later. These allegations spurred the National Geographic Channel into action. They started investigating the charges made by all the accusers.

The National Geographic Channel announced on January 3, 2019, that they were putting further episodes of StarTalk on hiatus. This would allow” the investigation to occur unimpeded”. Then on March 15, 2019, both National Geographic and Fox announced that the investigations were over. The networks further affirmed that both StarTalk and Cosmos would resume and that Neil deGrasse Tyson would keep his job as director of the Hayden Planetarium.