Updated On November 17, 2022 | Published By: Brandy Stratton
Share this
Married 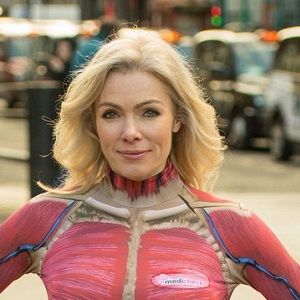 What is the relationship of Nell McAndrew?

Nell McAndrew is a married woman. She married Paul Hardcastle twice. They engaged in September 2004. He is a property developer. At first, they married in November 2004 in Huddersfield, West Yorkshire, England, then again at a marriage blessing on 25 Nov 2004 in Dubai.

Who is Nell McAndrew?

Tracey Jane McAndrew famous as Nell McAndrew is an English glamour model. Likewise, she is famous as an accomplished amateur athlete, with a marathon personal best time of 2:54:39. She has appeared on FHM, Maxim, and Loaded. She has also appeared as a presenter on Racing Rivals, Born to Fight, and many other.

Who are the parents of Nell McAndrew?

She was born on 6th November 1973 in Belle Isle, Leeds, West Yorkshire, England. She is the daughter of Nancy McAndrew. Similarly, she has an older sister and two younger brothers.

Similarly, her nationality is British and English but her ethnicity is unknown.

She first signed up with a modeling agency as the result of a suggestion by her hairdresser. Similarly, she started her modeling career as a catalog and magazine model and as a Marilyn Monroe lookalike. She first appeared on television as one of the hostesses on the game show Man O Man in the year 1996.

Similarly, she later appeared in the Daily Star as a Page Three girl but it was her role as the Lara Croft model for the video game Tomb Raider between 1998 and 1999 that brought her to the public’s attention. Likewise, she has enjoyed a successful career as a glamour model and appeared in FHM, Maxim and Loaded. And she has also appeared in fitness magazines, including Shape and Personal Trainer.

Likewise, she appeared on Television as a presenter on Racing Rivals, Born to Fight, It’s a Knockout and The Big Breakfast. Also, she has been a contestant on various game shows and reality shows including Fort Boyard, I’m a Celebrity… Get Me Out of Here!, Celebrities Under Pressure, Family Fortunes, and many others.

Her time in the 2005 London Marathon was fast enough that she qualified to run in the British Championship women’s race in future events. She ran the 2007 London Marathon at a more sedate pace with her mother after recently giving birth. In March 2012 she was the first woman across the finish line in the five-mile National Lottery Olympic Park Run in a personal best time of 29 minutes and 21 seconds. Her best time os 2:54:39.

There is no information about the awards and nominations of Nell McAndrew.

What is Nell McAndrew’s net worth?

Nell McAndrew has a height of 5 feet 9 inches and her weight is 64 kg. Similarly, she has blonde hair and green eyes color. Her body stat is 35D-26-35 inches.