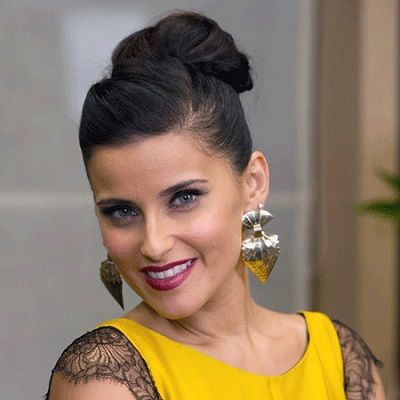 I put pressure on myself to be musically fresh, which is different from being trendy or being current. I like a fusion of sounds, just as long as it's funky.

I remember being five years old and it being like there was an orchestra in my mind and there was this soundtrack playing. I didn't know where it was coming from, but it was there. What I'm saying is that I tried on the pop hat for awhile and it was fun. But I'm ready to try new things.

When you meet people like that, you've got to really deliver. I like feeling like that like I've gotta hit it out of the park. Every time I pulled up to his studio, I felt like a little kid riding her bike over to a friend's house, saying, 'What are we going to play today?' I took the time to celebrate it. I knew that you can never recreate those moments. They happen once and they are gone.

Nelly Furtado dated American actor Ashton Kutcher in the past. Both the stars have admitted having kissed each other, once or twice. Ashton has also taken her to some expensive dates. But, still, their relationship didn’t go any further. Nelly dated Jasper Gahunia is a composer, from 2001 to 2005. Together, the couple also has a daughter, named Nevis Chetan, who was born on September 20, 2003, in Toronto, Canada.

Nelly dated Cuban-American sound engineer, Demo Castellon in January 2006. The duo engaged on July 6, 2007, and married on July 19, 2008. In April 2017, during an interview, Nelly announced that she had separated from Castellon in 2016. Moreover, Nelly is currently dating rapper Hodgy.

They made their relationship public in 2017 by appearing together on the red carpet of Monte-Carlo Gala For The Global Ocean.

Who is Nelly Furtado?

Nelly is a famous Canadian singer and songwriter. Likely, Furtado first gained fame with her debut album, Whoa, Nelly! (2000), which spawned two award-winning hits. She is a highly successful artist with a worldwide sale of over 40 million records and is the proud recipient of several prestigious awards including the Grammy Award for Best Female Pop Vocal Performance.

Nelly Furtado was born in Victoria, British Columbia, Canada on December 2, 1978. Her birth name is  Nelly Kim Furtado. Her father’s name is  António José Furtado and her mother’s name is Maria Manuela.

By the time she was nine, she had learned to play the musical instruments trombone and ukulele. She has a sibling namely, Lisa Anne. Nelly holds Portuguese- Canadian citizenship and  Azorean Portuguese ethnicity. Her birth sign is Sagittarius.

Talking about Nelly’s educational achievements, she graduated from the Mount Douglas Secondary School in 1996.

Talking about her profession, she became acquainted with Tallis Newkirk, member of the hip hop group Plains of Fascination, and sang some vocals for their album ‘Join the Ranks’ in 1996. Likewise, she also formed a trip-hop duo called Nelstar with Newkirk the following year but soon left the group.

In the year 1997, she participated in a talent show for urban females, namely, The Honey Jam talent show. There she caught the eye of Gerald Eaton, singer for the band The Philosopher Kings, and his bandmate Brain West. Whereas, Eaton and West collaborated with the young singer and co-produced her debut album ‘Whoa, Nelly!’ in 2000. The album featured three international singles including ‘I’m Like a Bird’.

During 2001, she embarked on the ‘Burn in the Spotlight Tour’ to promote her album. She traveled all over the U.S., Canada, and Europe and performed at different venues. Whereas, her second album ‘Folklore’ was out in 2003. The album featured a sound more mellow and diverse than its predecessor and had a rock-oriented, acoustic approach. It included the single ‘Forca’ which was the official anthem of the 2004 European Football Championship.

Likewise, her album ‘Loose’, released in 2006 had elements of dance, R&B, and hip hop. The album, which has been described as introspective and sad, explores the theme of female sexuality for which Nelly received considerable criticism. Also, she recorded a Spanish album ‘Mi Plan’ which was released in 2009.

Moreover, her debut album ‘Whoa, Nelly!’ launched her career and has sold more than eight million copies to date. It was accredited platinum in several countries including the U.S., U.K., Canada, Australia and New Zealand. Therefore, ‘Loose’ is her most successful album ever and it debuted at No.1 on the Canadian Albums Chart and on the U.S. Billboard 200. The album featured the super hit singles ‘Promiscuous’ and ‘Maneater’.

She has an estimated net worth of around $35 million and she has earned that sum of money from her professional career.

There was a rumor about Nelly Furtado pregnancy. Currently, she is far from rumors and controversies.

Nelly Furtado has a height of 5 feet 2 inches and she weighs 55Kg. Additionally, she has a measurement of 36-24-36 inches. Nelly’s hair color is black and her eyes color is blue. Furthermore, her dress size is 6 (US) and her shoe size is 8 (US).