Updated On November 23, 2022 | Published By: Robert Taylor
Share this
In Relation 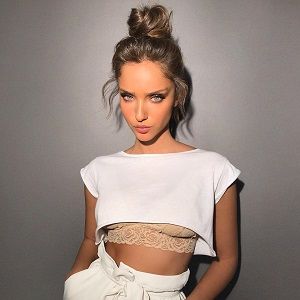 Neta Alchimister and Rami Gershon are madly in love!

The 23-year-old Israeli model, Neta Alchimister is a married woman.

She is married to soccer player Rami Gershon. The couple began dating for several months and got married in June 2019.

Talking about her past relationship, there is not any information regarding her relationship.

Besides this, she has never been involved in any affairs. As per the reports, Neta and Rami are enjoying their love life and living elegantly.

Neta Alchimister is an Israeli model and Instagram star. Currently, she is widely famous on Instagram earning more than 1 million followers.

Furthermore, she is also a fashion designer and also found the swimwear company BaNaNhot.

Neta was born on April 20, 1994, in Rishon LeZion, Israel. Moving towards her nationality, she is Israeli and her ethnicity is Jewish.

Her parent’s details are unknown, however, she has a sister named Sapir Alchimister and a brother named Gil Winter.

From the beginning of her childhood, she had a keen interest in modeling and also began to learn.

Neta began her career as a model. Back in 209, she began professional modeling. Furthermore, she also served as a soldier in the IDF in the C4I Corps.

Currently, she is widely famous on Instagram earning more than 1 million followers. Furthermore, she is also a fashion designer and also found the swimwear company BaNaNhot.

Besides this, she is also Israel’s 3rd most influential Instagram star after Bar Refaeli and Anna Zak.

Additionally, Neta is one of the Israeli personalities with the most social media followers behind Gal Gadot and Bar Refaeli. Later in 2016, this famous model was also the cover model for Blazer’s swimwear edition.

Being a famous model and Instagram star, she pockets a handsome amount of money from her profession. she earned a net worth of $5 million However, her salary is unknown.

Talking about her body measurements, she has a pair of gorgeous green eyes and brown hair.

Besides this, there is not any information regarding her weight and other body measurements.

Neta is quite active on social media.