Updated On October 12, 2022 | Published By: Brandy Stratton | In Married , Net Worth , Pregnant
Share this 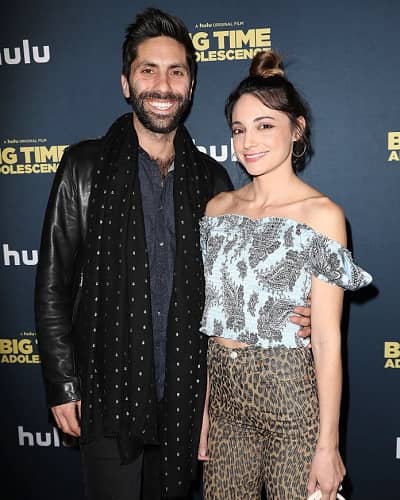 Update: The Catfish host and Dancing with the Stars alum and wife Laura Perlongo welcomed their third baby together, son Cy Monroe in September 2022.

“I’m excited to start trying for baby No. 3 myself. Now’s the time!”

Nev Schulman and Laura Perlongo met online through Instagram in the year 2015. Schulman asked her out on a date sending her a direct message.

Laura revealed that it was the first time she was picked up by a stranger on a motorcycle. She was a little nervous at first. They started dating soon after.

But he screwed and he had to work hard to get her back. He said,

“I just got out of a thing, and I had been damaged by that, and I felt that maybe I was all messed up, and I wasn’t ready.”

Only after a few months of dating, Laura was pregnant with their first child. They revealed that it was an accident but both were determined to start a family. Their daughter Cleo James on 21st October 2016.

They walked down the aisle in a romantic ceremony on 22nd July 2017. Max Joseph officiated the ceremony. Their daughter Cleo served as the flower girl.

Their reception was held on the beach with DJ, beach cabanas, pizza, and beer. Likewise, their second child, son Beau Bobby Bruce was born on 10th January 2019.

The Dancing with the stars Nev Schulman opened up about his experience of Covid-19. In March 2020, he and his wife Laura Perlongo battled with the coronavirus.

“It was really scary as there was so little information available and we were terrified that our kids would get sick too. For over three weeks, my constant fatigue, headaches and difficulty breathing were awful and the stress of wondering if my symptoms would worsen was horrifying.”

Even though he has completely recovered from the coronavirus but its long-term complications have affected his energy level. Schulman has recovered from cardio abilities.

But his toes were swelled and discolored. The dermatologists have referred to as ‘COVID toes’. In the summer and fall, he experienced some sort of toe injury and achiness.

What is the net worth of Nev Schulman?

Nev Schulman has a net worth of $500 thousand. He has acted in Nobody’s Fool, We Are Your Friends, The Walker, Una & Jacques, and Alberto Lives in a Bathroom. He has produced Minor Premise, Catfish: The TV Show, and The Adventures of Slaters’s Friend.

The condo consists of three bedrooms and two bathrooms in close to 1,300 square feet with 9.5-foot ceilings. Their living room gives a panoramic view of the sun as it dips below the Manhattan skyline.

Yaniv Schulman known as Nev Schulman, is an American producer, actor, photographer, and TV host. He is mostly remembered for the 2010 documentary “Catfish“. He is also the host and executive producer of the follow-up TV series Catfish: The TV Show on MTV and MTV Suspect. Read more bio…

Matthew Perry got engaged to his girlfriend Molly Hurwitz! List of hottest women Matthew has ever dated
Tags : Actor Dancing with the Stars