Updated On October 12, 2022 | Published By: Gracie Hale | In Entertainment , Interesting Facts
Share this 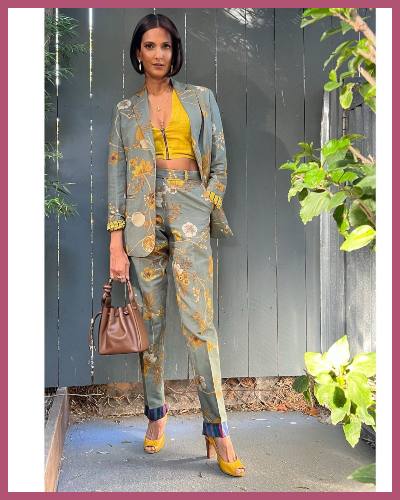 The main focus of the show is Devi Vishwakumar (Maitreyi Ramakrishnan), a high school student struggling with her father’s loss, adolescent social pressures, and the thrill (and embarrassment) of teenage crushes.

The series, created by Mindy Kaling, has been hailed by critics and is regarded as one of the best teen comedies on the platform.

In the show, Ramakrishnan is the main character, although her mother Nalina, played by Poorna Jagannathan, steals the show. Along with Devi, the character Nalina has grown throughout the course of the play.

Jagannathan’s character balances her dermatologist career with being a single parent to a hormonal adolescent. While also figuring out how to be a more tender and understanding figure in Devi’s life.

The 49-years-old actress has acted in a number of motion pictures and television programs, such as “Gypsy,” “The Night Of,” and “Big Little Lies.”

The 49-years-old actress has appeared in several films and TV shows, including “Gypsy,” “The Night Of,” “Big Little Lies,” and more. Similarly, she has faced unpleasant auditions and rejection as an actor.

During the Season 3 promotion, the actress shared an amusing experience about auditioning with Ryan Gosling.

Poorna Jagannathan: Awkward audition she once did with Ryan Gosling

Jagannathan shared with The Hollywood Reporter about an awkward incident she encountered while auditioning with Ryan Gosling for a project.

“You know, you have to go through so many levels and I was totally with it, I was totally on it. I had my grip on it (until) he started making out with me and I just melted and started giggling.”

The ‘Never Have I Ever’ singer then laughed and remarked,

“I was not allowed into that cast office for many, many years,”

That would undoubtedly be embarrassing for anyone to witness. We’re interested in Gosling’s response.

Poorna Jagannathan is a versatile American actress and producer. She is widely famous for playing the role of Safar Khan in The Night Of, as well as Nalini Vishwakumar in Mindy Kaling’s Netflix original series, Never Have I Ever. See more…

Leonardo Dicaprio and girlfriend Camila Morrone split after 4 years
Tags : Actress Never I Have Ever Producer