Skip to content
Married Biography
Married Biography / Entertainment / New Couple In The Town!! Brooklyn Beckham Is Dating Madison Beer; Beer Stepped Out For Dinner With Her Boyfriend And His Mom Victoria Beckham 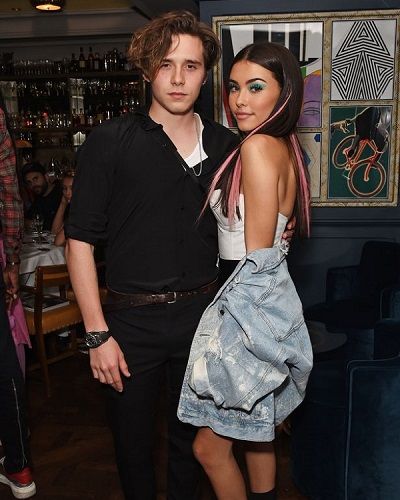 Love is in the air! Here is the new couple in the town. Brooklyn Beckham is dating American singer Madison Beer. The duo recently stepped out for the dinner with Beckham’s mom Victoria Beckham. Brooklyn is the oldest son of Victoria Beckham and David Beckham. Here are the more details about the adorable couple Beckham and Beer.

Madison Beer and Brooklyn Beckham stepped out for the dinner hand in hand. Aren’t they a cute couple? Walking hand in hand with little flirting and cuddles, they really give us the relationship goals.

On Thursday, July 20, 2017, they went for dinner together with Brooklyn’s mom Victoria. For the dinner date, Beckham and Beer came hand in hand. Moreover, they stopped for some video before joining Victoria for dinner.

As per the eyewitnesses, the couple went a bit cuddly and flirty during the meal. Well, some of Victoria’s friend also attended the dinner with the new couple.

Previously, last week they stepped out together at a concert in Los Angeles. On July 21, Friday they again came out together for shopping at Barneys New York in Beverly Hills.

You may like to read Does Rumor To Be Gay Manu Rios Has A Girlfriend? Here Are Further Details About His Relationship Status

Previous Relationships and headlines of Beckham and Beer

In 2012, Justin Bieber came across Beer in YouTube while singing a cover of the Etta James classic “At Last”. She aired to popularity after Justin signed Beer to Island Records and even appeared in her first music video.

Sometime back, Beer grabbed all the headlines after a leaked recording emerged of her then-longtime boyfriend, musician Jack Gilinsky. In the recording, he was ostensibly verbally abusing her during a fight.

As this is not the first relationship of Beckham, he previously dated Chloe Grace Moretz. They dated on and off for years after meeting in 2014. Moreover, he was linked with model Sofia Richie. Madison was last linked to Jack Gilinsky.

Brooklyn Beckham is the son of famous soccer player David Beckham. He has his own identity from his career, taking a shape, as he has done many television series. See more bio…

Madison Beer is an American singer and actress. She used to post her singing videos on YouTube. She gained popularity when one of her YouTube video links was tweeted by the phenomenal pop star, Justin Bieber. See more bio…

What is inside Jada Smith’s bag? What keeps her marriage going on for so many years? Learn the secrets here!
Tags : Actress American singer Author Singer