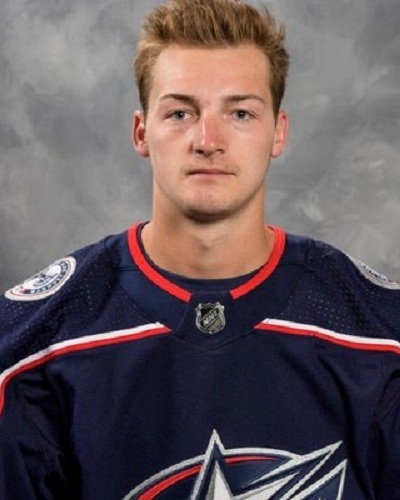 Carson Meyer and his performance in the last year

Instead of being at the top, Carson’s Meyer was in fact deteriorating. Carson, 21 was feeling lethargic, with no appetite, and was also losing weight. He was unable to give his best to the game.

All eyes were on him and his future team, the Columbus Blue Jackets were beginning to worry about him and his performance. He had fared rather poorly at Miami University of Ohio and his current teammates were also confused and did not know why this was happening. His future seemed to be bleak!

Carson and his health

Carson and his parents were also extremely worried about his health. For months, no one was able to figure out what was the cause of the trouble. Carson revealed to The Athletic:

“One [opposing] coach asked some of my teammates if I had cancer,”

“His personality completely changed, too. He’s usually really upbeat and energetic and excited about life. But he was sad and quiet, just not himself.”

Carson lost tremendous weight and had no energy to play during the practice session or during the games. Innumerable blood and other tests were performed including for infectious mononucleosis but it all drew a blank.

All the answers to his problem-the expelled tapeworm

On February 27, Carson went to the washroom, and from his intestine in his poop came a huge tapeworm. Talking about the incident that day, Carson said:

“I FaceTimed my mom and was like, ‘What the hell is this thing?’ I was freaking out. Absolutely freaking out.”

“I was trying to be calm, He showed me everything and I remember saying, you have to get that to the trainer and figure out what it is so they can get you fixed. And I did say at that moment, ‘This is why everything has been the way it’s been, Carson. This was it.’ It was scary, but it was a relief.”

The Diphyllobothrium Latum and the remedy

Carson was immediately put on a strong anti-parasitic medication so that it could eliminate parts of the tapeworm that might have been left behind and may pose problems later on for Carson. Once he was on these medications, Carson revealed that after about a month of the treatment, he started feeling better.

“I honestly was starting to think that it was all in my head, and that got me really worried, But about a month after we got an answer, I started feeling like myself again, and I feel really good now.”

“It’s been a 180, He’s back to eating everything in the house again, and he’s got his attitude back. He’s Carson again.”