New Theory Surfaces Up Regarding Amelia Earhart, Delve In To Know What It Has To Say Regarding Earhart’s Mystery

Updated On October 12, 2022 | Published By: Chirlot Sharma | In Career
Share this 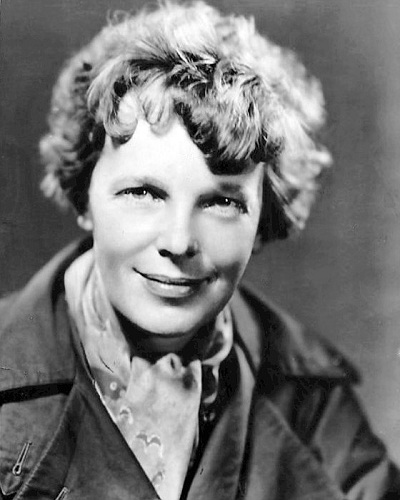 As part of her attempt to become the first woman to aerially circumnavigate the world, Amelia Earhart and Noonan took off in a Lockheed Electra airplane on July 2, 1937, from Lae, New Guinea.

With an intention to reach Howland Island, the pair were in radio contact with the US Coast Guard cutter Itasca, just offshore of Howland Island. The aviators had radioed that they were low on fuel and unable to find the tiny island.

They were never seen again thereafter. Amelia Earhart disappeared over the Pacific Ocean 80 years ago, but all those decades of theories have done little to satisfy the appetite of investigators still searching for her true fate.

Last week on Wednesday, the latest piece of possible evidence regarding Earhart’s mysterious disappearance surfaced, after a History Channel documentary released a newly discovered photo from the US National Archives of several blurry figures.

The investigators claim the photo depicts Earhart, her navigator, Fred Noonan, and her plane on the Marshall Islands after their disappearance.

The new theory argues that the Aviator pair crashed near the Marshall Islands, and were eventually captured by the Japanese.

Response To The New Theory

However, the new theory is dismissed by other Earhart investigators and is just one of a number of possible ideas conjecturing what may have happened to Earhart.

“I don’t blame people for wanting to know (what happened), and it is one of the greatest mysteries of the 20th century because she was so well known,”

Dorothy Cochrane, the curator for the Aeronautics Department at the Smithsonian National Air and Space Museum, said.

“The world was following her. So it is really someone drops off the face of the earth, naturally, everyone wants to know what happens.”

The latest theory is not the sole theory regarding Amelia. Below is a look at some of the most prominent of those theories surrounding what happened to Earhart.

Based upon the most agreed-upon facts, the most basic theory says that the aviator pair of Earhart and Noonan eventually ran out of fuel, crashed into the Pacific Ocean near Howland, and died. That is also the theory that is officially held by the US government as well as the Smithsonian Museum.

Then, the US government spent $4 million searching for them over about 2 weeks, at that point the most expensive search in history. However, their search came up empty. Amelia was declared legally dead on January 5, 1939, according to the History Channel.

Died as a Castaway-

Meanwhile, Theorizing from The International Group for Historic Aircraft Recovery (TIGHAR) argues that Earhart survived a rough landing on a remote atoll in the Pacific; however, she died soon after.

“We believe she died as a castaway,”

As per TIGHAR’s theory, Earhart and Noonan landed safely on a reef in the ocean and unsuccessfully attempted to radio for help. Their plane was ultimately washed away into the ocean by rising tides, leaving them alone on the uninhabited island of Nikumaroro, which lies about 350 miles south of Howland Island.

In October 1937, few months after the disappearance of Earhart, a Colonial Service Cadet Officer named Eric Bevington took an image of the shoreline of Nikumaroro. TIGHAR claims that the blurry form in that photo may show landing gear components of the Electra.

Likewise, TIGHAR also claims that a skeleton of a castaway found on the island in 1940, but tested decades later, is consistent with a female of Amelia Earhart’s height and ethnic origin.

Died in Captivity of the Japanese-

Another popular theory holds that Earhart and Noonan landed in the Marshall Islands, were then taken prisoner by the Japanese, and died in the Japanese detention in Saipan.

It is the same theory documented by the recent History Channel documentary. The theory argues that a newfound photo of Jaluit Atoll in the Marshall Islands shows the aviator pair alive and well near the Japanese ship the Koshu.

The documentary also quotes investigators and facial recognition experts who hold the figure at the left in the photo has the same hairline as Noonan. Similarly, they also say that the figure sitting and facing away from the camera has the same hair length and body size as that of Amelia Earhart.

As per the theory, the US search did not find Earhart because the Japanese had already taken her into their custody.

Some residents of the Marshall Islands claim to have witnessed the aviators land there. The Marshall Islands even imparted stamps honoring the 50th anniversary of her flight, showing Earhart’s plane “crash landing at Mili Atoll” and “recovery of the Electra by the Koshu.”

You may also like to read Hopes Of Finding Life On Mars Dealt With A Blow, Dive In To Know About The Latest Study Revelation Of The Red Planet’s Environment

Earhart was a Spy-

As per another theory, the Aviator pair of Earhart and Noonan were spies who were forced down on a secret mission to gather some intelligence about the Japanese in the Marshall Islands.

Supporters argue that their secret mission, approved by then-President Franklin  Roosevelt, was kept under wraps after their capture.

The theory was given attention due to the 1943 fictional movie “Flight for Freedom,” which was loosely based on Earhart’s story.

In the movie, the female pilot is instructed to issue a distress signal and land her plane near the Japanese Islands so that the US Navy surveillance planes can fly over them to collect intelligence regarding the activity on the island.

Meanwhile, one variation of the spy theory says that Earhart survived World War II. As per the theory, she returned to the US and lived under the assumed name of Irene Bolam until her death in 1982.

“Amelia Earhart was captured, and taken first to Saipan and then to Tokyo where she was kept a prisoner in the Imperial Palace until 1945,”

The theory maintained that Amelia’s secret was used as a tool for bargaining after the war in order to allow the Japanese Emperor to remain in his power.

Also read Amelia Earhart Mystery: The Photo Used For The Latest Of The Theory On Her Missing Taken Too Early To Be The Missing Pilot

Irene Bolam sued the book publishers for $1.5 million, saying that she was not Earhart and had proofs from the 1930s to verify her point.

she called the book in an interview with the Times.

Even though the book was later withdrawn,  the theory still persists.