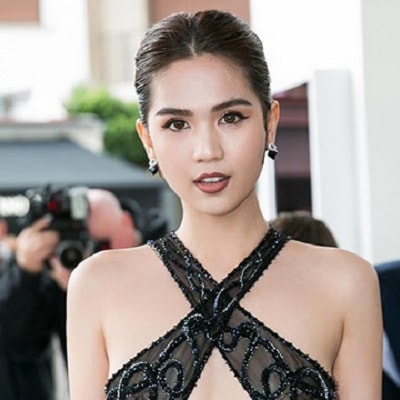 Ngoc Trinh is currently single. She is currently focusing on her career. Previously, she dated Billionaire Hoang Kieu in 2018. After that, she has not been linked with any other and seems she does not want to be in a relationship.

Who is Ngoc Trinh?

Ngoc Trinh is a Vietnamese model, businesswoman, fashion designer and TV personality who is also known for creating fashion brand C & T as well as opening a spa.

Ngoc holds Vietnamese citizenship but her ethnicity is unknown.

Talking about her education history, she completed her schooling from Private Elite High School.

She was discovered by manager Khac Tiep and began her modeling carer. After that, she joined the Vietnamese fashion village in 15 years old and won the Miss Jewelry contest at the age of 16.

She was named Photogenic Supermodel Vietnam in 2005 and competed in the Miss Vietnam contest in 2011. In addition, she won the competition was crowned Miss Vietnam.

She is also a fashion designer and her designer suit was once worn by Victoria Beckham. Furthermore, she has appeared in ‘Vu Quy Dai Nao’ (2019) and ‘Queen of the Bikini’ (2016) as an actress.

She was awarded the Impressive MC award at the 2016 Vietnam Television Awards (VTV).

She must have accumulated a huge sum of money from her modeling and acting career however, her exact net worth, salary, and income are unknown through reliable sources.

She appeared at Palais Du Festival which has reportedly caused ‘public outrage’ in her home country and the government officials have faced her with a large fine.

Also, she is rumored to be dating Vukhactiep, Founder & CEO at Venus Entertainment.