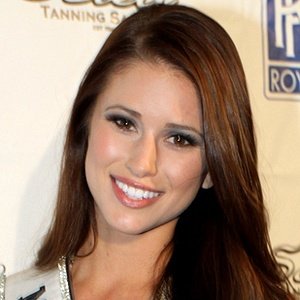 I relate to [women and children in women's shelters] on a personal level because I've been there myself.

I'm so proud to bring the title of Miss USA back to Nevada.

I think more awareness is very important so women can learn how to protect themselves. As a fourth-degree black-belt, I learned from a young age that you need to be confident and be able to defend yourself, and that's something that we should start to implement for a lot of women.

Nia Sanchez is a married woman since 2015. She is married to actor Daniel Booko. The couple began dating each other before she won Miss Nevada USA in 2014. The couple got married on October 17, 2015. Their marriage ceremony was held in Temecula, California. The couple has been married for more than a year now and their relationship is going very well. There are no any other records of her relationships.

Who is Nia Sanchez?

Nia Sanchez is an American beauty pageant. She is also a model and actress. In addition, she is a taekwondo coach. She is best known as the winner of Miss USA 2014. Nia is the first contestant from Nevada to win the Miss USA title. She is the runner-up in the Miss Universe 2014 competition. She is a fourth-degree black belt in taekwondo.

Nia Sanchez was born on 16 February 1990, Sacramento, California, USA. Her nationality is American and belongs to Mexican, German, and Spanish ethnicity.

Her birth name is Nia Temple Sanchez. She is the daughter of Nicole Sanford and David Sanchez. She has a brother named David Jr. Nia’s parents divorced when she was six years old. After that, she lived in a women’s shelter with her mother.

She then moved to Menifee, California with her brother and father when she was eight years old. She attended Paloma Valley High School and graduated in 2008. Nia became interested in taekwondo since her early childhood age.

She began training taekwondo at the age of eight. Moreover, she studied jazz and ballet for over five years.

Nia began her career as a beauty pageant at the Miss San Jacinto Valley competition at the age of 13. At the age of 19, she won Miss Citrus Valley USA title. She competed in the Miss California USA 2010 and finished as the second runner-up. Later, she competed in and won Miss Riverside County USA 2011 and Miss Hollywood USA 2012. Nia rose to wide fame after winning the Miss Nevada USA 2014 on January 12, 2014.

Nia Sanchez competed in the Miss California USA 2010 and finished as the second runner-up. After that, she competed in and won Miss Riverside County USA 2011 and Miss Hollywood USA 2012. Nia rose to wide fame after winning the Miss Nevada USA 2014 on January 12, 2014.

Sanchez is first Miss Nevada USA contestant to win Miss USA. Moreover, she is the fourth Hispanic to win Miss USA title. After winning the Miss USA 2014, she represented the United States at Miss Universe 2014. She finished as the first runner-up to Paulina Vega of Colombia. In addition to modeling, she is a former taekwondo player, and now a taekwondo coach.

She is a fourth-degree black belt in taekwondo. Sanchez is first Miss USA to be featured on the cover of Tae Kwon Do Times Magazine. She has also appeared in roles of various Disney princess’ characters at Hong Kong Disneyland for seven months in 2012.

Nia Sanchez: Salary and Net Worth

Her net worth and salary are unknown.

Nia became a part of a big controversy after winning Miss USA 2014. At that time, a controversy arose regarding her claimed Nevada residence. She failed to win Miss California USA three times in 2010, 2011 and 2012. It was reported that she created a paper trail to set up her capability to compete in Miss Nevada USA.

At that time, the competition rules were that Miss Nevada USA eligibility requires six months residency in the state as evidenced by two documents from “voter ID or registration card, tax return, or any other documents. Nia was criticized by many people of faking Nevada residency. She later stated, “I Didn’t Fake Nevada Residency to Compete—This Is My Home!”