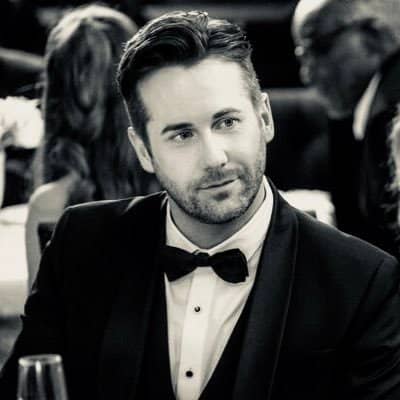 Niall Matter had previously dated Graceland and Serinda Swan, with whom he still remains friends. He is currently married to Sara Bradley. Both got married in July 2016 in a private ceremony in Hawaii. The couple has two children, Kate Matter and Besty Matter. Kate was born in 2016 and Besty was born in 2018.

Who is Niall Matter?

Niall Matter is a Canadian-American entertainer known for his role as Trent Hamilton in The Best Years. Matter is also known for his performance on The Predator (2018), Watchmen (2009), and Primeval: New World (2012).

Matter was born in Edmonton, Alberta, Canada 20th October 1980. By birth, he is Canadian but he also holds U.S citizenship. He is 40 years old. Born in Edmonton, Matter grew up on his parent’s dairy farm. According to WHOTIMES, his parents’ names are Arthur and Jennifer Matter.

On the recommendation of a school teacher, Matter enrolled in drama class at thirteen years of age. At the age of 17, he got himself in trouble, and his parents sent him to work on oil rigs to work with his grandfather. He found this experience helpful for him to focus on the study and pass high school so, he continued to work on oil rigs alongside his grandfather and his brother, Trevor, until the age of 25.

While working on the oil rigs, Matter had a serious accident where he was nearly crushed inside the cab of a 17-ton drilling rig and he nearly lost his right leg. It took him about 6 months to recover from the injury and after returning back, he again witnessed another accident where a fellow co-worker lost his both leg. This convinced Matter to move on and pursue a new career. He moved to Vancouver and attended Vancouver Film School in pursuit of a long-term career in acting.

Matter is a Canadian-American actor. According to IMDb, Matter has about 45 credited work as an actor.

Matter landed his first professional acting job in 2007 in Paul Ziller’s, Beyond Loch Ness. During the filming of Beyond Loch Ness, Matter had sent an audition tape to the producers of The Best Years, a teen drama series. Through this, he gained the role of Trent Hamilton in the series for which he is still best-known.

Matter has been active in the TV and Movie industry since 2007.

Currently, Matter is not working on any projects.

Niall Matter is a talented and skillful actor. He has received a few nominations and awards. In 2013, Matter got nominated for “Best Lead Performance by a Male in a Dramatic Series” for his role in Primeval (2012) as Leo.

This was his first professional nomination in the acting field. In 2015, he was nominated for “Best Performance by an Alberta Actor” for his role in Ally Was Screaming (2014) as Rosie as well.

He won his first award for the category, Best Lead Performance by a Male in a Television Movie, in 2019 for his role in Frozen in Love (2018) as Leo.

Matter must earn a decent amount from his acting career. According to various sources, his net worth is estimated to be around $4 million.

Details of his assets are unknown.

The Canadian-American actor is very concerned about his career. So, he tends to stay away from controversies.
There are also no rumors circulating around him currently.

Niall Matter is 5 feet 10 inches tall and weighs around 75 kg. Furthermore, he has black hair and blue eye.