Nicholas Crovetti is possibly single for now. However, he will surely find a perfect lover in the future. There’s no doubt that he will be followed by many lovers because of his personality and charming look. Currently, he is serious about his career and working hard on it. 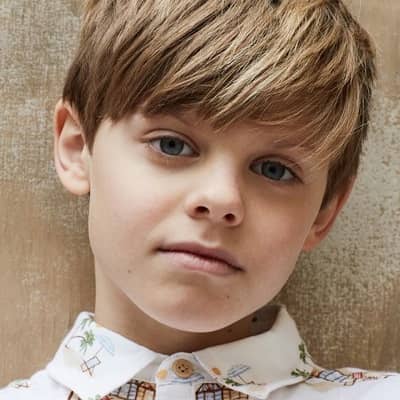 Who is Nicholas Crovetti?

Nicholas Crovetti is an American young actor. He is popular for his role as Max Wright in the TV series Big Little Lies. He has made his appearances in various movies and Tv series.

Currently, he is active in the entertainment industry and filming for his incoming film Salem’s Lot.

Likewise, he was born to celebrity parents, Bradley Crovetti and Denise Crovetti. However, his father is a producer and writer, on the other hand, his mother is a film actress. He grew up with his twin brother, Cameron Crovetti, and sister, Isabella Crovetti who are both actors. Crovetti is originally from California and spent his childhood in his hometown.

He holds American nationality. While he is not working, he attends regular classes at his school.

Nicholas Crovetti started his acting career in the TV series ‘Black-ish’ as Dylan. After that, he appeared with a brief appearance in the film, Anywhere With You.

However, he got attention as Max Wright in Tv Series ‘Big Little Lies’ from 2017-2019. Later, he appeared as the character, Iggy Peck, in ‘Ada Twist, Scientist’ in 2021 which adds more limelight among the kids as well. His other notable performances include ‘Brothers by Blood’ and ‘Witch Hunt’.

He also appeared in the Tv Shows such as The Morning Show, The Jam, On the Red Carpet: Brian Banks the Movie, WGN Morning News, and Windy City LIVE.

Speaking on his income, he makes a decent sum of money through his successful movie career. Similarly, his overall net worth has not been calculated.

Besides this, there is no information regarding his asset values and salary. Currently, he is living a luxurious life with his family in the Los Angeles area.

There are no rumors and controversies about this young promising personality.

Nicholas has a charming personality with an average height and moderate weight. However, there is no more information regarding his body stats because his body might vary later due to his teenage. His hair color is blonde and his eyes are blue.

Crovetti is quite popular on Instagram with over 14.2K followers.