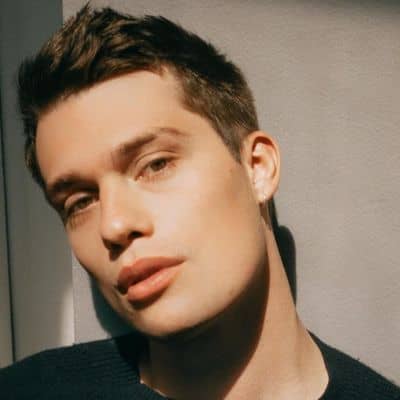 Who is Nicholas Galitzine Dating?

Nicholas Galitzine is currently single and does have a girlfriend. He has always diverted the question when asked about his relationships in many interviews.

He has focused on his career since his teenage and he might have at least one girlfriend but he has not revealed any information regarding it. We will update it soon.

Who is Nicholas Galitzine?

Nicholas Galitzine is a famous English actor. He is widely known for his roles in Handsome Devil in 2016, Cindrella in 2021, and Purple Hearts in 2022.

The rising star was born on 29  September 1994 in London, England. As of 2022, he is 27 years old holding an American nationality. Similarly, he is of mixed ethnicity and as per the astrological chart, his birth zodiac sign is Libra.

Talking about his family background, he was born to his father, Geoffrey Galitzine, an entrepreneur, and his mother, Lora. His mother is of Greek-American descent. Moreover, he has a sister named, Lexi Galitzine who is an illustrator and interior stylist.

So, as per his academics, he went to Dulwich College for his study.

In the initial, he was cast in the 2914 film, The Beat Beneath My Feet. In the movie, he shared the screen with Luke Perry and also did several songs for the original soundtrack of the movie.

In 2015, he was cast in one of the crime drama series, Legends, after which he was named a ‘Star of Tomorrow’ by Screen International.

Following that, in 2016, he starred in High Strung, an American drama film. Michael Damian is the director while Janeen Damian and Michael Damian are the writers of the film. In the movie, he shared the screens with other stars like Jane Seymour, Sonoya Mizuno, Richard Southgate, Paula Freeman, and others.

After appearing in the Irish comedy-drama, Handsome Devil, he got in a nomination for five awards during the 15th Irish Film

He was part of, The Changeover, a New Zealand mystery drama. In 2020, he starred as a bisexual teenager, Timmy in The Craft: Legacy, which is a spin-off of ‘The Craft.’

However, he was cast as Prince Robert in the romantic musical film, Cinderella. In 2022, he played the role of fictional Prince Henry of Wales alongside, Taylor Zakhar Perez. On June 24, 2022, he released his debut single, ‘Comfort’ and

Moreover, he starred as Luke Morrow, in the Netflix romance film, Purple Hearts, which has been recently released on July 29, 2022.

As per the sources, Nicholas’s net worth is estimated to be around $1.5 million. However, the amount he is paid for one movie or appearance has not been disclosed yet.

Nicholas has never made headlines for any rumors or controversies. However, reality shows usually come up with several rumors and scandals.

The rising star stands at the height of 6 feet weighing around 68 Kg. Nicholas Galitzine has an athletic body physique with body measurements of 40-30-37 inches. So, it means her chest size is 40 inches, waist size is 30 inches and hips size is 37 inches.

Talking about his physical appearance, with a fair complexion, he has a pair of brown eyes and hair of the same color.

The rising star is present on Instagram under the username, @nicholasgalitzine having more than 2.6 million followers.

On the other hand, his Twitter account is enriched with over 66.3K followers. He also has a Tiktok account that has around 1.9 million followers and 10.2 million likes.

Likewise, he is also a singer and has uploaded singing videos on his Youtube channel titled, Nicholas Galitzine.