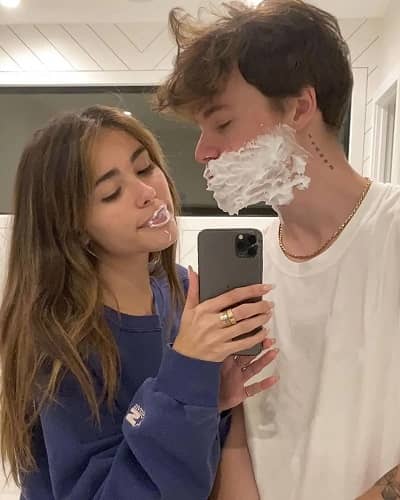 Madison Beer has a TikTok star beau! Beer is in a relationship with Nick Austin who is a member of the Hype House.

“i don’t know how i got so lucky. happy birthday to the love of my life, my best friend, my dream girl, my soulmate. every day with you feels like im dreaming, which i might be. i love you. forever n ever n ever <3”

Also read Jacob Busch and Rebel Wilson are not together anymore! Know about their Split, Relationship timeline, Family of Jacob

How much is the net worth of Madison Beer?

Madison Beer has a net worth of $16 million as per Celebrity Net Worth. In November 2020, she bought a newly-built mansion in Encino, California. She paid $5.6 million for the mansion. In 2020, Madison gifted her personal assistant a brand new Mercedes-Benz C300.

Likewise, her singles are Carried Away, Boyshit, Baby, Selfish, Good in Goodbye, Dear Society, All Day and Night, Hurts Like Hell, Home with You, Dead, and more.

Nick Austin is an American TikTok star. Nick Austin is a content creator on TikTok and a member of Hype House, a collab collective in Los Angeles. His name on the media TikTok is nickaustinn. On their best days, the entrepreneurs at HypeHouse create more than 100 pieces of new video content collectively. Read more bio…

Madison Beer is an American singer and actress. She used to post her singing videos on YouTube. She gained popularity when one of her YouTube video links was tweeted by the phenomenal pop star, Justin Bieber. Read more bio…

All about the successful married life of Linell Shapiro and Robert Shapiro! Tragic death of son Brent
Tags : Actress Singer