Nick Bateman an award-winning model and actor who has modeled for Fila, Jockey, Calvin Klein. His sister Amanda Cerny is a social media personality. Nick is happily married to his longtime girlfriend and has a child. 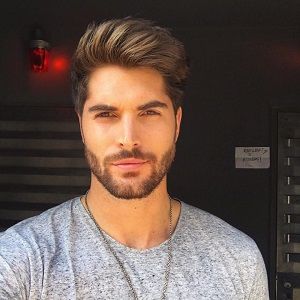 Canadian model, Nick is married to his longtime girlfriend Maria Corrigan on July 17, 2019, in Malibu.

Nick and Maria have a son, Chase born in October 2018.

The couple met near Maria’s hometown in Burlington and began dating since 2008.

Furthermore, they regularly post several photos of them on their social media accounts. In addition, the lovebirds have also spotted together many times in the public and media.

Who is Nick Bateman?

Nick Bateman is a Canadian model and actor. Furthermore, he has also won a Golden Maple Award for Outstanding Social Media Achievement in 2016. Additionally, he is also a four-time World Champion in Martial Arts/Weapons.

His mother’s name is ‎Maria Corrigan.

Talking about his nationality, he is Canadian and his ethnicity is Anglo-Saxon. Furthermore, he has a sister Amanda Cerny.

As a child, he started to learn Karate when he was just four years old. From the beginning of his childhood, he wanted to become a ninja turtle.

Concerning his education, the famous model attended a local and high school. Later, he completed his graduation from Capilano University in Vancouver.

Nick began his career as a martial artist. From the beginning of his childhood, he had a keen interest in Karate and also began to learn from the early age of four.

As a result, he also became a four-time World Champion in Martial Arts/Weapons. Furthermore, he also opened his own Karate School and run for 3 years. Later, he decided to make his career in acting.

Initially, he landed the role in Hobo with a Shotgun along with Rutger Hauer and Gregory Smith. After a couple of years, he also appeared in several films such as Tapped Out, Airplane Mode, The Hazing Street, and few more.

Apart from that, he has also starred in a couple of TV shows such as Just for Laughs, Originals, Space Janitors, Mr. D, and a few more. In 2013, Nick also appeared as Ian Furmanek in The Listener.

Being a famous model, the Canadian hunk has also worked with international brands such as Abercrombie & Fitch, Dsquared, Fila, Jockey, Calvin Klein, and a few others.

So far, Nick has won a Golden Maple Award for Outstanding Social Media Achievement in 2016.

Being a popular model and actor, he pockets a handsome amount of money from his profession. His net worth is estimated to be $32 Million.

Nick has a height of 6 ft 4 inches and he weighs 90 kg. Moreover, he has a beautiful pair of light brown eyes and brown hair. Besides this, there is not any information regarding his other body measurements.