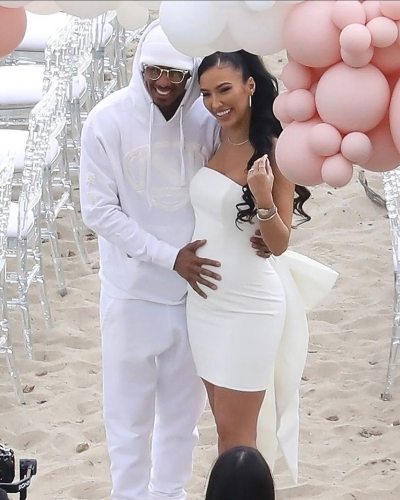 Nick Cannon, the comedian and actor’s eighth baby on the way with model Bre Tiesi.

Cannon, 40, and Bre, 30 were photographed together cradling Bre’s baby bump in matching outfits. The party was decorated with pink, blue, and white balloons in an intimate gathering. The mom-to-be wore a tight white strapless dress and Cannon matched Tiesi in a white ensemble consisting of a hoodie, sweatpants, sneakers, and a beanie.

In one of the pictures, a shot caught up in which guests fired blue confetti into the air, seemingly the baby is a boy.

The baby will be the first child of Tiesi whereas Nick will be the father of seven. Last month, Nick lost his 5-months old son, Zen who passed away due to a brain tumor.

Zen was diagnosed with hydrocephalus two months after his birth.

How many children does Nick Cannon have?

Also read “Nick Cannon, the American actor is the father of a baby girl! Her name is Powerful Queen!”

Bri Tiesi is a North American actress, model, and Instagram celebrity. She has also a Youtube channel where she uploads lifestyle vlogs. The model has a similar look to actor Megan Fox. Her full name is Breana Falon Tiesi.

In 2018, he got married to Johnny Manziel but they got divorced within a year. She also appeared on MTV Wild ‘N Out. See more…

Nick Cannon is an American rapper, actor, and comedian. As an actor, he has appeared in the film Goal II: Living the Dream in the role of the fictional footballer TJ Harper. Furthermore, his notable film works include Men in Black II, Drumline, Monster House, and a few more.

As a singer, Nick’s single ‘Gigolo’ from his debut album hit the entire music industry and became a huge hit. In 2012, he also won the NAACP Image Awards in the category of Outstanding Supporting Actor for his role in the movie Up All Night. See more…