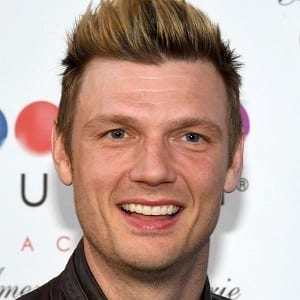 I try to make myself look as normal as possible because I like people to relate to me. Teen People, Summer 2000.

I'm kind of like a sponge in a way. Everybody that I meet inspires me. You can learn so much from any person that you meet any day on the side of the street.

Girls who are older than me, girls that are smaller, pretty long dark hair, honest, loyal, very romantic, someone that loves me for who I am deep down inside, someone who is independent, fiesty with a great personality, good heart, most of all - my dream girl has to be natural, not too much makeup! - what he looks for in a girl

All the things I've been doing have been very unique and original. I've just been trying to stand on my own two feet when it comes to everything. I don't want to follow trends. I don't want to be like everybody else. You know, that's not me.

I don't believe in being mean to anyone. I'm a really peaceful person. That's something I get from my family.

When did Nick Carter marry?

Nick Carter was initially in a relationship with Tila Tequila, and Debra LaFave. From 1997 to October 2000, he dated American Singer, Willa Ford.

Presently, Carter is a married man. He is married to American Fitness Guru, Lauren Kitt Carter. The pair exchanged vows on 12 April 2014.

Who is Nick Carter?

Nick Carter is an American musician and actor. People recognize him as the lead singer of the pop group ‘Backstreet Boys. Additionally, he has also released three solo albums.

He has also starred in his own reality show, ‘House of Carters.

Carter was born in Jamestown, New York on January 28, 1980, to parents Jane Elizabeth Schneck and Robert Gene Carter. He became interested in the world of music during his childhood years and his mother enrolled him in voice lessons and dance lessons at a very young age.

He is of American nationality. Furthermore, he belongs to a mixed ethnic background of English, German, Scottish, Welsh, Irish, Scots-Irish/Northern Irish, and French-Canadian.

He initially appeared in several commercials including the Florida State Lottery and The Money Store. In addition, he played the lead role in the fourth-grade production of ‘Phantom of the Opera. Later, he auditioned for Disney’s ‘The Mickey Mouse Club’.

Eventually, the pop group Backstreet Boys was formed on April 20, 1993, with Carter, AJ McLean, Brian Littrell, Howie Dorough, and Kevin Richardson. He was the band’s youngest member. The band became successful over the years and they released several albums.

Coming to his solo career, Nick Carter has released three albums, ‘Now or Never, ‘I’m Taking Off, and ‘All American’.

In addition, he has collaborated with Jordan Knight for his album ‘Nick & Knight’.  Apart from his musical career, Carter also has over 45 credits as an actor.

Carter won the MTV TRL Award in the category of Sneak Attack Award which he shared with his band members.

Nick Carter: Net Worth and Salary

Carter has not revealed his current salary. However, he has an estimated net worth of around $35 million as of 2022.

Carter became part of a controversy after he was arrested in Key West, Florida on misdemeanor battery on January 13, 2016.

Additionally, he was also involved in another controversy after it was revealed that he was under review by the Los Angeles District Attorney for sexual assault allegations. Backstreet Boy’s Brian Littrell later defended him over the rape accusation.

Talking about his body measurement, Nick Carter has a height of 6 feet (1.83 m). Additionally, he weighs around 72 kg.

You may also like to read Lou Doillon, Richard Gere, and Nick Carter.