Nick Collison is a married man since a long time. He is married to his longtime girlfriend Robbie Harriford. The couple dated each other for several years before getting married. After years of their affair, the couple got married in July 2007.

The couple together has a daughter named Emma Collison. Nick and Robbie have been married for ten years now and their relationship is still going very well. He is living a happily married life and there is no sign of divorce at all. 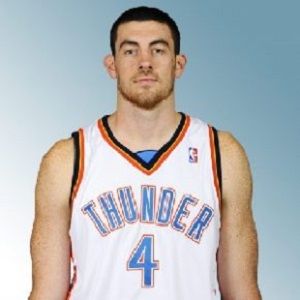 "It was hard to get ourselves going. I think because it's late in the year, and we're not in the playoff race, it took us a while to wake up. Our play early was so bad that we weren't able to win the game."

"I think we had a little bit of fool's gold in the first half. In the second half, they got stops and it started to make it harder on us. We couldn't get anything going and inside they just beat us up."

"They just wore us down. Our play in the first half was a little bit of fool's gold. Ray [Allen] was unconscious, and we shot 60 percent. The second half, they played much better and we struggled."

Who is Nick Collison?

Nick Collison is an American professional basketball player. He currently plays for the Oklahoma City Thunder of the National Basketball Association (NBA). He previously played for the Seattle SuperSonics of the NBA.

Nick was born on October 26, 1980, in Orange City, Iowa, USA. His nationality is American and he is of North American ethnicity.

He grew up in Fort Dodge and Iowa Falls. His mother’s name is Judy Collison and his father’s name is Dave collision who was a basketball coach. He has a younger brother who is also a professional basketball player. He has not revealed any information about his childhood life.

He attended Iowa Falls High School from the University of Kansas(US). He had an interest in basketball since his childhood age and he dreamed of being a professional basketball player since his high school days.

Nick began his basketball career with Kansas Jayhawks. As a college player, he went to two Final Fours with the Kansas Jayhawks. He finished his college career as the leading scorer in the history of the Big 12 Conference. He also played for the United States national team at the 2002 FIBA World Championship. Nick began his professional basketball career with the Seattle SuperSonics of the National Basketball Association (NBA) in 2003. He was selected by the Seattle SuperSonics with the 12th overall pick in the 2003 NBA draft. He missed the 2003–04 season due to shoulder injuries. He was named NCAA Player of the Year in 2003.

Nick made his regular-season NBA debut on November 3, 2004, against the Los Angeles Clippers. He signed with the Oklahoma City Thunder in the 2008-09 season. He helped the Thunder reach the 2012 NBA Finals where they faced the Miami Heat. On February 3, 2015, he signed a two-year, $7.5 million contract extension with Thunder.

Nick Collison: Salary and Net Worth

He has a net worth of $25 Million but his salary is not revealed yet.

Nick Collision has a good height of 6 feet 8 inches. His bodyweight is 116kg. His eye color is brown and his hair color is dark brown. Besides this, there is no information about his shoe size and dress size.