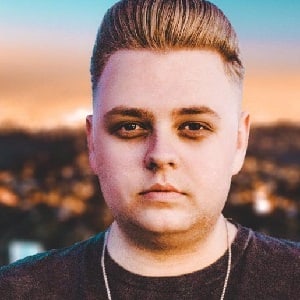 Nick Crompton is openly gay. He is presently in a relationship with Levy Erskine. The pair met through Tinder. There are no further details regarding this relationship at present.

Who is Nick Crompton?

Nick Crompton is an English entrepreneur and YouTube personality. He is the co-founder of the social media marketing agency Social Chain. Additionally, he was also the COO of the popular web group Team 10.

Crompton was born in Bradford on February 5, 1995. He has two brothers. Throughout his childhood years, he grew up in England. Not much is known about his early life. He is of British nationality. Furthermore, there are no details available about his ethnic background at present.

After the completion of his education, Crompton bought a camera and began producing YouTube videos. In addition, he also worked several gigs at bars to earn extra money. Soon, Nick began collaborating with other YouTubers. He also started a separate gaming channel. Later, he teamed up with several other YouTubers to form Team 6. The channel, however, was short-lived. Furthermore, he also started his own podcast. Eventually, Crompton got the job as Head of Talent and Influencers of Social Chain.

Crompton soon met Jake Paul who was already a social media sensation. They formed Team 10 and was credited as the COO of Team 10 until his departure in 2018. Currently, he is famous on social sites like Instagram and Twitter and has a huge number of followers from around the globe.

Crompton has not revealed his current salary. However, he has an estimated net worth of around $ 1.6 million at present.

Crompton received several criticisms due to his “England is my city” lyric in the song ‘It’s Everyday Bro’. Furthermore, he and his lyric were turned to memes. Additionally, Team 10, which he was part of also attracted numerous controversies along its way over the years. At present, there are no rumors concerning Crompton’s life and career.

Talking about his body measurement, Crompton has a height of 5 feet 10 inches (1.78 m). Additionally, he weighs around 80 kg. Furthermore, his hair color is dark brown and his eye color is brown.