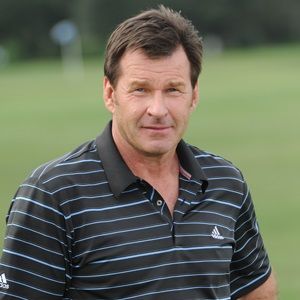 I never mixed with golfers when I was playing, mainly because I didn’t want to talk golf all night

Nick Faldo has been married three times until now. But sadly all of those marriages failed. From 2001 to 2006, he was married to Valerie Bercher. Together they have a daughter named, Emma Scarlet. Emma was born in 2003.

Before that, he was in a relationship with a beautiful lady named, Brenna Cepelak. Their relationship lasted from 1997 to 2000.

Prior to this, he was a husband to Gill Bennett. Gill was a famous author and historian. They were married for more than a decade. They married in 1986. Together they gave birth to three children named, Natalie, Georgia, and Matthew. But their marriage couldn’t last long and they got divorced in 1998.

His first marriage was with Melanie Rockall. He met her for the first time when he was 21 years old. But his affair with then-secretary, Gill Bennett ruined their marriage. At last, they got divorced in 1984.

Who is Nick Faldo?

England-born Nick Faldo is a Professional Golfer. He is famous as ‘Sir Nick Faldo.’ He possesses English nationality. He started playing golf professionally since 1977.

Nick is often regarded as one of the best Golfers of all time. Presently, he works as an On-Air Golf analyst for BBC.

Nick has a total of 41 professional wins. His professional tour wins include 30 “European tour” win, 9 “PGA Tour” win, and other wins.

He was born in Hertfordshire in England. His birth date is July 18, 1957. Similarly, his birth name is Nick Alexander Faldo and holds English ethnicity.

His father is George Arthur Faldo and his mother is Joyce Smalley Faldo.

He started playing Golf for fourteen years old. He used to watch Jack Nicklaus during those days.  Nick Faldo played golf throughout his high school days.

As per his education, he attended Sir Frederic Osborne School.

Nick Faldo initiated his golf career from a very young age. During his amateur career, he won “English Amateur” in 1975 and “British Youths Championship.” Then in 1977, he turned professional.

He has won the award of “PGA Player of the Year” for one time and “European Tour Golfer of the Year” three times. Additionally, Nick Faldo received “Knight Bachelor” in 2009 and the “Payne Stewart Award” in 2014.

A veteran Golfer like him earns a massive salary from winnings. Moreover, he earns more from endorsements and sponsorships. Consequently, his net worth as of now is estimated at around $60 million.

Moreover, the average salary of a golfer is around $68k per year.

Nick has been part of controversy for mentioning Sam Torrance as useless referencing the 2008 Ryder Cup.  Consequently, he has been into other controversies too. Presently, he is free of any rumors and criticisms.

Nick Faldo has been able to maintain his body. His height is around 6 feet 3 inches.

Similarly, his body weight is around 88 kg. He has light brown hair and dark brown eyes.