American paranormal investigator, musician, and television personality. He is married and a father of two.

Nick Groff is a married man for a second time. He exchanged vows with actress Tessa DelZoppo on 22 October 2021. They welcomed a baby boy named Luciano Groff, on April 12, 2022.

Previously, Nick was married to his longtime girlfriend Veronique Roussel.

They dated each other for several years before their marriage. After years of their affair, the couple got married on 25 September 2004, in Las Vegas.

The ex-couple together has two daughters named Annabelle and Chloë. Nick and Roussel were married for over a decade but now they are no longer together.

They separated via divorce in the year 2018. 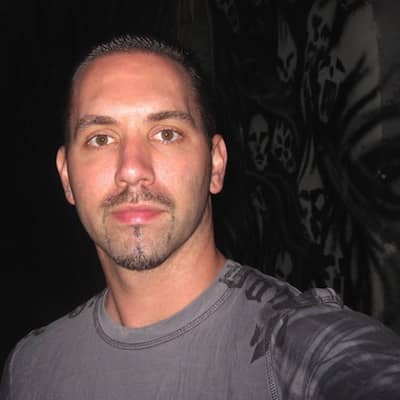 If you’ve ever visited a battlefield or a murder scene, you can feel that something bad happened there.

Who is Nick Groff?

Nick Groff is an American paranormal investigator, musician, and television personality. He is currently the lead investigator for the television series Paranormal Lockdown.

He previously was a co-investigator and executive producer of Ghost Adventures.

Nick Groff was born on 19 April 1980, in San Jose, California, USA. His nationality is American but his ethnicity is Caucasian.

He grew up in New England. During his early life, he was an adventurous and hyper child. When he was eight, he had a severe accident and almost passed out in front of his mother.

His smart mother’s quick thinking saved his life from such near death.

He graduated from Pelham High School in New Hampshire and later studied film at the University of Nevada, Las Vegas.

In 2014, he contributed as an investigator and executive producer of Ghost Adventures: Aftershocks. He also contributed to Ghosts of Shepherdstown in 2016.

Since 2016, he is working as the lead investigator for the television series Paranormal Lockdown. He is also the executive producer of the series. Besides Television and investigation, he is also a musician.

Nick has a slim body with a height of 6 feet 1 inch. His eyes and hair are dark browns. Other information on his body measurement and shoe size is unknown.

To know more about Michael Hutchence, Alejandro Aranda, and Sandra Oh please click on the link.

Who is Nick Groff's Wife?

Does Nick Groff hs any children?