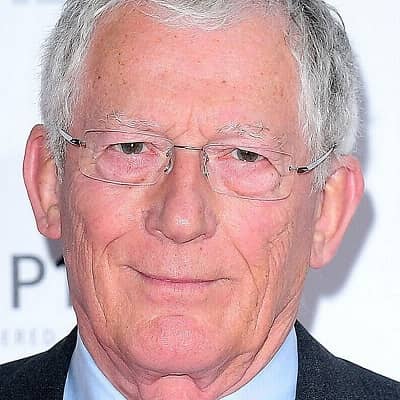 Catchphrase - You Be Sure of It!

Nick Hewer is in a relationship with a woman named Catherine since 1996.

Previously, he was married to Margo Spindler in 1973. But, later they got divorced after 12 years of marriage in 1985.

This couple together has a son James, and a daughter named Kate Hewer. His son James is the co-director of Nick’s company.

Who is Nick Hewer?

Nick Hewer is an English journalist, television presenter, company director, and former public relations consultant. He is best known for his appearance as an advisor on the British television series ‘The Apprentice’.

Nick was born on 17 February 1944, in Swindon, Wiltshire, England with a birth name Nicholas Radbourn Hewer.

He grew up in Old Town. His father‘s name was John David Radbourn Hewer, and his mother‘s name was Mary Patricia. Hewer studied at Clongowes Wood College in Ireland.

He wanted to study law at Trinity College but his parents could not afford fees to study there. Later, he received an honorary ‘Doctor of Letters’ degree from Kingston University on November 2, 2012.

Nick has two brothers and two sisters. He belongs to English-Irish descent.

Earlier, in 1960, Nick Hewer moved to London to join a public relations consultancy as a trainee. Hewer joined the board and eventually bought out the owner and became the sole shareholder within a six-year.

In 1983, his PR company was hired by Amstrad to represent them. In 1998, he sold his PR agency. He had spent 21 years in the Amstrad management group.

As a businessman and public figure, Nick has worked in various sectors. He supported to promote the change in the UK pension scheme in 2012. The next year, he supported Build Your Small Business campaign with ‘Visa Print’.

Earlier, in 2012, he worked as a host of a game show Countdown. The same year, Hewer presented a four-part series The Farm Fixer on BBC Two.

He also presented BBC series The Town that Never Retired and We All Pay Your Benefits. The next year, he appeared on BBC’s episode of Who Do You Think You Are? Nick co-presented documentary series Nick and Margaret: Too Many Immigrants? with Margaret Mountford in 2014.

Nick appeared on panel shows and television series including Ask Rhod Gilbert, Would I Lie To You? Room 101, and Have I Got News To You.

He has also appeared on BBC TV series Celebrity Antiques Road Trip. Since 2015, he has been actively involved in the charity Pancreatic Charity Action. Hewer also presented a charity appeal during Pancreatic Cancer Awareness Month on the BBC 4 Radio.

Earlier, he took part in the Mongol Rally, a charity driving event. He wrote a blog about his journey on the online newspaper Daily Telegraph. Later, he became the president of the Royal College of Speech and Language Therapists on April 1, 2019.

He is an author of his biography My Alphabet: A Life from a to z published in 2018.

The average salary of a television presenter in the UK is $65,000. Meanwhile, according to some sources, Nick has an estimated net worth of $40 million.

There were few rumors going around that Nick Hewer would be replaced due to fears surrounding his safety, but Rachel Riley has since appeared to put an end to those claims.

Earlier, Nick’s show Countdown was plunged into a betting ­controversy after huge sums of money were bet out of nowhere on new host Nick Hewer getting the job.

Nick Hewer is 5 feet 8 inches tall and has a decent weight. Likely, he has light hair and blue eyes.