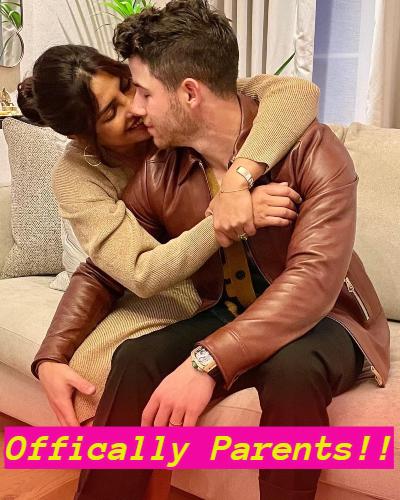 The Bollywood beauty, Priyanka has hinted months ago that she and Nick were ‘expecting’ at the Jonas Brothers Family Roast show. The show premiered in November last year, she joked that they were ‘expecting’, before adding ‘to get drunk tonight’.

“If you don’t know, we’re the only couple who doesn’t have kids yet, which is why I’m excited to make this announcement.” As Nick raised his eyebrows with terrible face expression while she announced.

“Sorry, babe. Nick and I are expecting… To get drunk tonight and sleep in tomorrow!”

After all, it’s true the beautiful couple has welcomed a new cute member to their family. On January 21, Priyanka and her husband Nick took to Instagram to announce that they had welcomed their first child via surrogacy.

They both shared identical statements on their respective social media on Friday.

“We are overjoyed to confirm that we have welcomed a baby via surrogate. We respectfully ask for privacy during this special time as we focus on our family. Thank you so much”

In fact, Priyanka has talked before in numerous interviews about starting a family. In a recent interview with Vanity Fair, she said,

“They’re a big part of our desire for the future. By God’s grace, when it happens, it happens,”

The two were married in 2018 in India. Last December, they celebrated their third wedding anniversary. Similarly, they opened an Indian restaurant called Sona in the heart of New York.

Earlier in November 2021, Chopra had removed her husband’s surname from her respective social media handles. Afterward, the couple’s divorce rumors has been speculated in the media. During the time, Chopra’s mother Madhu Chopra had refuted her daughter’s divorce rumors.

Later on, Priyanka had shut the rumors of their divorce by commenting on her husband’s Instagram post.

After the news of their newborn baby, it has been clear that Nick and Priyanka’s relationship has remained steady ever since they were together.

Priyanka Chopra is best known as the winner of the Miss World 2000 pageant. She is commonly also known for her role as Alex Parrish on the ABC thriller series Quantico. See more bio…