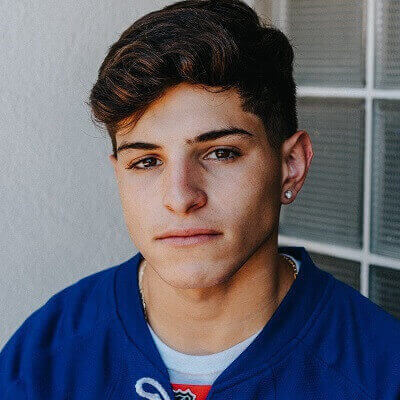 Nick Mara is currently single and not dating anyone. He has not posted any pictures indicating a potential partner in any of his social media accounts.

Previously, he dated Alexys Cruz, who is a dancer and was a cheerleader at the University of Miami in 2017-18. He revealed their break up in June 2018 and asked his fans to respect their decision and personal life and wished her all the best.

Who is Nick Mara?

Nick Mara is an American dancer, singer, and actor. He was formerly a member of ‘ICONic Boyz’ and is currently a member of the five-piece band, ‘PRETTYMUCH’.

Nick Mara was born in Englishtown, New Jersey, USA on November 8, 1997. As of 2020, his age is 22. Although he has not revealed the identities of his parents, he is the youngest of their four children.

He has two elder brothers named Chris and Rob and also an elder sister named Mia. His sister, Mis is his manager and responsible for managing his professional activities.

Mara loved dancing from an early age and started dancing when he was four years old. He spent his childhood days in New Jersey and his ethnicity is Irish and Italian.

Nick Mara started his dancing career in 2011 by participating in MTV’s ‘America’s Best Dance Crew’ with the hip hop dance group, ‘ICONic Boyz’. Following that, he made an appearance as a featured dancer in MTV’s ‘MADE’ and ‘Saturday Night Live.’ Moreover, he also appeared in Disney’s show ‘Shake It Up.’

He started posting dance videos in social media and eventually caught the eyes of the famous Simon Cowell in 2016. He got the chance to audition for the boy band, ‘PRETTYMUCH’. Mara took the opportunity and got selected. In July 2017, the group released their debut single titled ‘Would you Mind’.

The multi-talented youngster also has done some acting works. He starred in the short film, ‘Freeman Velocity’, and also featured in the successful off-Broadway show, ‘Me and Caesar Salad’. Since then, he has made appearances on ‘Monday Night Live’, ‘Disney’s Shake It Up’, ‘Alien High’, and even performed alongside Mariah Carey at the 12th Rockefeller Center Christmas Tree Lighting Event.

Mara has brown eyes, and similarly, brown hair. He has not revealed his height and weight.

Despite his young age, Nick Mara has an estimated net worth of around $10 million as of 2020. Although he has not revealed his annual salary, on average an American dancer earns around $67k.

The young sensation has not been involved in any controversies. He has been able to keep himself away from any type of controversy and scandal. So far, he has not done anything controversial in his career. He has kept his profile clean and has simply focused on her career and personal life.

Being this successful at a young age, he also has a lot of haters who try to drag him down with false rumors. But since the rumors have no truth behind them, they are rarely talked about. Mara also distances himself from this negativity and doesn’t involve himself in it.

You may also like to read the Bio, Career, Net Worth, Relationships, and more about Torrey DeVitto, Calum Best, Tiffany Coyne, and more.