Nick Mullen is a married man. He is married to his college sweetheart Haleigh Hughes. The couple first met each other during their college as both of them were the student of the University of Southern Mississippi.

While in University, Nick was a college player and Haleigh was on the cheerleading team. They fell in love after that and have been together since then. On 19th December 2016, Nick proposed Haleigh for marriage.

The two walked down the aisle on 15th July 2017. Recently in August 2019, Nick welcomed his first child. He is a baby boy named Luke Clayton Mullens. 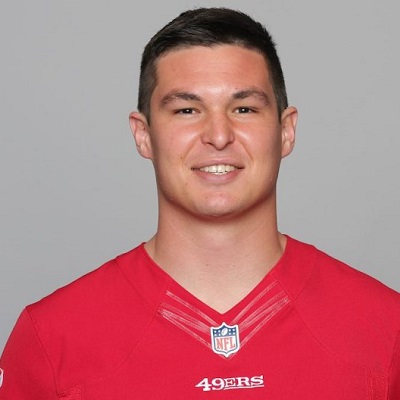 Who is Nick Mullens?

Nicholas Clayton Mullens known as Nick Mullens is an American professional football quarterback also the winner of the 2012 Gatorade Player of the Year. Nicholas Clayton plays for the San Francisco 49ers of the National Football League (NFL).

Similarly, he was in the Southern Miss Golden Eagles football team during his college career.

Nick was born on 21st March 1995 in Little Rock, Arkansas to father Mark Mullens and mother Suzanne Mullens. His grandfather is Ernie Tabor who was a pitcher for the Philadelphia Phillies back in the 1950s.

Sports run in the family as his uncle Scott Tabor pitched for the Arkansas Razorbacks baseball team. Also, his uncle holds the record for most career wins. Now talking about his siblings he has an older brother named Frank and an older sister named Heather.

He belongs to American nationality and his ethnicity is Caucasian. He studied at the Spain Park High School in Hoover. For University education, he attended the University of Southern Mississippi.

During high school, Nick played football for Spain Park and emerged as a starting quarterback. Similarly, on his senior season, he threw 3,649 yeards and 40 touchdowns against only seven interceptions.

With the 2013 season with a 0-6 record and mired in an 18-game losing streak, he started his career. He was inserted in the team as a starter for game seven. But the team was overmatched by North Texas suffering a 55-14 loss in which Mullens went 12-for-31 passing for 210 yards and one touchdown.

On 4th May 2017, Nick signed with the San Francisco 49ers as an undrafted free agent. Similarly, he entered the training camp as the fourth backup quarterback on the depth chart. On 2nd January 2018, he signed a contract after spending his entire rookie season on the practice squad.

He was waived by the 49ers and signed the practice squad the next day on 1st September 2018. On 1st November 2018, she was named the starter for the 40ers’ Week 9 game against the Oakland Raiders on Thursday Night Football.

Nick has a height of 6 feet 1 inches and weighs around 95 kg. Similarly, his hair and eyes color both are brown.