Nick Nolte was nominated for a Golden Globe for his movie Rich Man, Poor Man. He is a father of two.

Nick Nolte has been married a total of four times in his career.

He was previously married to Sheila Page. They were married from 28 November 1966 to 1970.

He was also married to Rebecca Linger from 19 February 1984 to 1994. The pair has 1 child from this marriage, Brawley Nolte.

Nolte is currently married to actress Clytie Lane. They have a daughter from this marriage, Sophie Lane. The pair married on 8 September 2016. This marriage is going strong as there is no news regarding any extramarital affairs at present. 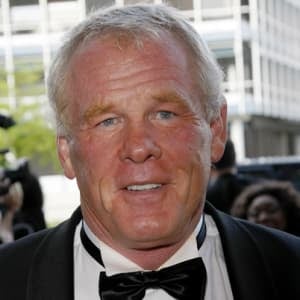 Early on, I decided that I was going to lie to the press. The best approach to talking about my personal life was to lie.

I've made a lot of mistakes and I don't regret any of them. Sometimes, that's the only way you learn.

You convince yourself you can fix the screenplay, because there's a lot of money involved. But you can never make it work. If the script has a hole in it, it will always have that hole.

I didn't stay in a popular vein. I never really got stamped like that. I worked very hard to keep changing my image.

If you feel you have a film that's valid, you stick your ass on the line.

Who is Nick Nolte?

Nick Nolte is an American actor, author, former model, and producer. People mostly recognize him for his role in the 1991 film ‘The Prince of Tides’.

Additionally, he has also appeared in movies including ‘Affliction’, ‘Warrior’, and ‘Down and Out in Beverly Hills’ among others.

Nolte was born in Omaha, Nebraska on February 8, 1941, to parents Franklin Arthur Nolte and Helen. His father was a three-time letter winner in football at Iowa State University and his mother was an expert Antique Dealer. He became interested in the world of acting and modeling from an early age.

He is of American nationality. Furthermore, he belongs to a mixed ethnic background of German, English, Scottish, Northern Irish, Scots-Irish, and Swiss-German.

Nick Nolte initially worked as a model. He was in the field of modeling in the late 1960s and early 1970s. Additionally, he appeared as Vic in the TV series ‘Death Valley Days’. He also appeared in ‘Walt Disney’s Wonderful World of Color’ and ‘Dirty Little Billy’.

In 1973, he played Billy Randolph in the TV series ‘Griff’. In addition, he also portrayed the role of Ron Johnson in the TV series ‘Cannon’. Since then, he has appeared in numerous other movies and television series. All in all, he has over 25 credits as an actor.

Some other movies and television series that Nolte has appeared in are ‘Graves’, ‘The Ridiculous 6’, ‘Return to Sender’, ‘A Walk in the Woods’, ‘Gracepoint’, ‘The Trials of Cate McCall’, ‘Luck’, ‘The Company You Keep’, ‘Arcadia Lost’, ‘Tropic Thunder’, ‘A Few Days in September’, ‘Neverwas’, ‘Off the Black’, ‘Intimate Affairs’, ‘Breakfast of Champions’, ‘Nightwatch’, ‘I Love Trouble’, ‘I’ll Do Anything’, ‘Everybody Wins’, ‘Down and Out in Beverly Hills’, and ‘Return to Macon County’ among others.

Nolte also has two credits as a producer. He has also worked in regional theaters, including the Old Log Theater.

Nolte has not revealed his current salary. However, he has an estimated net worth of around $75 million at present.

Nolte became part of a controversy after he was arrested for selling counterfeit documents in 1965.

Additionally, he received a 45-year prison sentence and a $75,000 fine. The sentence was later suspended.

Furthermore, he also became part of another controversy after he was arrested on suspicion of drunk driving on September 11, 2002. At present, there are no rumors concerning Nolte and his career.

Talking about his body measurement, Nick Nolte has a height of 6 feet 1 inch.

Additionally, he weighs around 81 kg. Furthermore, his hair color is blonde/grey and his eye color is blue.

Nolte is not active over social media.

Also get to know more about Jodie Foster, Marilyn Manson, and Drew Barrymore.