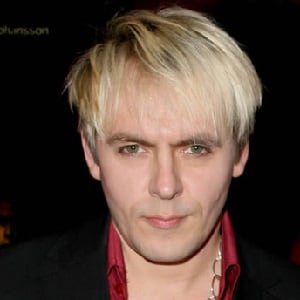 I felt very grown up when I was wearing makeup thank you very much.

I'm sure I'm a schizophrenic. The problem is I can't tell the difference between which one's which, which one is the real me.

Nick Rhodes was previously married to Julie Anne Friedman. The pair met when Rhodes was on an American tour in 1982. They later married on 18 August 1984. They have a daughter together, Tatjana Lee Orchid. They later separated after filing for divorce in 1992.

Rhodes was also in a relationship with British Director Madeleine Farley from 1991 to November 1999. Additionally, he dated TV personality Tara Palmer-Tomkinson for 2 months from December 1999 to February 2000. Rhodes has also dated American model Mary Gray and American actress Meredith Ostrom. In 2009, he was in a relationship with Swiss Personality, Marie-Louise Stoffel.  At present, he is believed to be single.

Who is Nick Rhodes?

Nick Rhodes is an English musician, producer, and singer. People mostly recognize him as a founding member of the popular band Duran Duran. Additionally, he has also released albums with Arcadia and Stephen Duffy.

Rhodes was born as Nicholas James Bates in Moseley, Birmingham on June 8, 1962, to parents Roger Bates and Sylvia Bates. His parents were the owners of a Birmingham toy shop. Additionally, he became interested in the world of music since his childhood years. He is of British nationality. Furthermore, he belongs to the English ethnic background.

Rhodes is famous for his dyed locks and heavy use of eyeliner. Apart from his work with Duran Duran, he also published a collection of his abstract photography titled ‘Interference’. After Roger and Andy Taylor walked away from the band, the band released 1988’s ‘Big Thing’. In addition, this album was a commercial disappointment. After the three Taylors, John, Roger, and Andy reteamed in 2004, the band released ‘Astronaut’ and later also released the studio album ‘All You Need Is Now’.

Rhodes has not revealed his current salary. However, he has an estimated net worth of around $ 60 million at present.

Rhodes’ and Duran Duran’s past history of drug abuse has been topic of several controversies over the years. At present, Rhodes has not been in the media spotlight. There are no other notable controversies concerning him at present. Furthermore, currently, he is not linked with any rumors.

Talking about his body measurement, Rhodes has a height of 5 feet 9 inches (1.75 m). Additionally, his hair color is Blonde/Grey and his eye color is hazel.